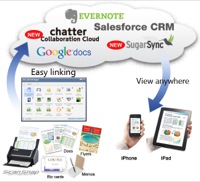 Earlier in the week, I wrote about the Fujitsu ScanSnap getting new Scan To Mobile functionality.

The ability to scan to your iPhone or iPad is not the only software update that Fujitsu released this week. They have also added new cloud scanning functionality as well.

I thought I’d take a run through of the cloud scanning options that exist as of this update.

If you haven’t already, follow the instructions at the start of this ScanSnap Connect post to get the Online Update.

You have long been able to use your ScanSnap to scan to Evernote. In fact, one of the most popular posts on DocumentSnap remains this ScanSnap Evernote tutorial from 2009.

Starting with the ScanSnap S1100, the ScanSnap software has had the built-in ability to scan to the Evernote client.

At the time, I wrote this post about the S1100 software that takes you through the Evernote scanning functionality. Now with the update, you can do this on all newer models.

Fujitsu actually snuck the ability to scan to Google Docs into ScanSnap Manager back in July 2011, but I strongly suspect that unless you were upgrading your ScanSnap software to Lion, you would have had no reason to upgrade.

To learn more about scanning to Google Docs with your ScanSnap, you can again see my S1100 software post for instructions on how that all works.

This is one service that is new with this week’s update. ScanSnap users now have the ability to scan to SugarSync. I know that DocumentSnap has a lot of SugarSync fans, so this should make some of you happy.

To be totally honest, I didn’t really understand this when I heard about it. Can’t you just “scan to SugarSync” by scanning to a synchronized folder?

It turns out, according to this Fujitsu page, it looks like when you scan to SugarSync, it will allow you to do some file manipulation before uploading. So there you go.

Yeah, I wasn’t really familiar with Salesforce Chatter either. Fortunately, Salesforce does have an information page about it.

I can only assume that if you are a Salesforce Chatter user, this is good news. You can see Fujitsu’s page for more information about it.

So, there you go, some of the new (and not so new) updates that Fujitsu released in North America this week. If you are a cloud-scanner, check it out.

[…] with the ScanSnap S1100 and later with a software update for other ScanSnap models, Fujitsu has provided Evernote integration built into ScanSnap […]

"Starting with the ScanSnap S1100, the ScanSnap software has had the built-in ability to scan to the Evernote client." But not the ScanSnap in the land of its birth, Japan. I had to create the profile BY HAND! Still have the blisters to prove it!

Really! That is surprising. Usually with ScanSnap stuff, Japan gets things months ahead of North America.