Update: The Fujitsu ScanSnap S1300 has been released in the US! See this post for details.

OK, well, this is pretty hot. It looks like Fujitsu in Japan has a new ScanSnap cooking up called the ScanSnap S1300.

Basically, it looks like the love child of the ScanSnap S1500 and the S300, with the “M” versions as godparents. 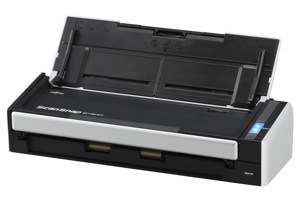 Its compatible with Windows 7 and Mac OSX Snow Leopard out of the box. It has similar specs to the S300 – it’s 8 pages per minute and holds 10 sheets.

Details (in English anyways) are pretty scarce but here is a video (WMV unfortunately) that shows it in action. It’s in Japanese of course, but you will get the idea. Here’s Fujitsu Japan’s page about it too.

What do you think of the S1300? Obviously I’ll post more info as it becomes available.

thanks, your site originally turned me on to the ScanSnaps and the S1300 (I held off buying the 300M b/c of you). thx for a great site. (p.s. i'm going to integrate S1300 with Evernote and Nozbe, which already play beautifully together….)

Review of S1300 in today's WSJ:
WSJ.com – Pint-Size Peripherals Scan or Print at a Price http://on.wsj.com/9KXSiQ