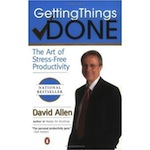 This is a guest post from Alex Satrapa, a software engineer and Paperless Document Organization Guide interviewee.

Through DocumentSnap you’ve been introduced to the Paperless Workflow, which relates to organising documents. You may also have been introduced to the Getting Things Done system, which relates to taking action. The two can be used very effectively together: the Paperless step “Move To Correct Folder” is where the entire GTD workflow happens, with the various folders external to the GTD workflow mapping into the Document Storage block of the paperless workflow chart.

Let’s work through this process, the way it works in real life for one Paperless practitioner. This practitioner (“you”) has set up an automated workflow using Yep and Hazel. More about the details later.

Today, you receive a paper invoice from ACME Corp for your new rocket jetpack (because catching the roadrunner requires the proper tools). You work through the Paperless process “Scan with Scanner” step – place the document in the feeder for the Scansnap, press the button, when the document comes out you feed it through the shredder. The next couple of steps happen automatically: “Scan To Inbox Folder” & “Apply OCR”.

Now that we’re at the Paperless “Rename File” step, we also apply the GTD “What Is It?” step. On the computer you open up Yep, which is configured to show you all the documents in the Inbox folder. In Yep, you rename the invoice to “ACME – Invoice – 2011-04-01” because it’s from ACME, it’s an invoice, and the invoice is due by April 1st. You then tag it as “invoice”, “acme”, and “roadrunner” (because it’s related to the “roadrunner” project), add “Invoice for rocket jetpack” to the Spotlight comments field, and Hazel moves the document to the Pending folder (which is the “Move To Correct Folder” step).

You process the rest of your mail in a similar manner. All invoices have been deemed actionable, but deferred.

Aside: You defer invoices simply because you’ve made the decision to pay invoices in batches, since (for example) access to the payments interface of the Internet banking service requires an SMS authentication, which is only valid for ten minutes.

Having processed all your mail, the Inbox is now empty. With an empty Inbox, you can take a short break and marvel at the nice empty space you have on your desk.

Now it’s time to get to the “Pre-defined Work” part of the GTD flow. So you open up the Pending folder in Yep. There are a bunch of invoices that have been moved here by Hazel – filter them by selecting the “invoice” tag in Yep. Next, you open your Internet banking system and work through the process of paying each invoice. Let’s go through the process with the rocket jetpack invoice.

You open the rocket jetpack invoice. You’re using a Mac, so the document is opened in Preview.

You pay the invoice using the bank’s “BPay” system, and the bank gives you back a confirmation including a receipt number of 12345. Now you annotate the PDF with (for example) “Paid BPay 2011-03-20 #12345”. The important part here is to include the date, the payment method and the receipt number in case you have to look that information up later.

Now you save the changes to that PDF and close it. Since we’re using Yep, you can just add the “paid” tag, and Hazel will file that document away in the “Financial Year 2011” folder.

Here’s what we have done, using the GTD and Paperless workflow terms:

Yep is a neat little app from Ironic Software. It’s basically a nifty tool intended to replace the Finder, for the purpose of finding things. Yep supports the OpenMeta tagging standard, which allows you to “tag” a document without playing silly tricks with the Spotlight comments field.

Hazel comes from Noodlesoft. It’s a very basic rules-based robot that monitors specified folders, and can perform actions on files when certain conditions are met. Hazel supports the OpenMeta standard.

The rules that were in place for this workflow are:

Some other helpful resources:

I’ve been using Hazel and Yep too, but on the long run I wasn’t really satisfied with it.
First I’m not very comfortable with Yep, and I’m not sold on OpenMeta. Will those be still around in five years? What if in three years I have to change from OS-X to Windows? Will OpenMeta be a thing in Windows 18? Probably not. And what about Android or iOS? So I’m not betting on any tagging at all.
Hazel does an excellent job, but for every new contact/sender of any kind you need to write a new rule. And for those senders with a rule, there are still some PDFs which can’t be recognized for whatever reason.
At the end, there always were a lot of PDFs I had to manually rename and reorganize and the whole process wasn’t really convincing to me. It was hacky and bumpy.
What I’m using now is a little tool called PDFiler. It does a really good job in renaming and organizing all my PDFs.
It makes renaming really easy and remembers the folders where you put your PDFs. So the next time you receive an invoice, say from your car dealer, it automatically moves it in the right folder. Without the need to create rules and stuff.
I really like it!

So are Yep's OpenMeta tags searchable by spotlight or Launchbar?

Yep they sure are.

Is there a Windows app that is similar to Hazel?

We would recommend checking out http://www.Gtdagenda.com for an online GTD manager.

You can use it to manage your goals, projects and tasks, set next actions and contexts, use checklists, schedules and a calendar.
Syncs with Evernote, and also comes with mobile-web version, and Android and iPhone apps.