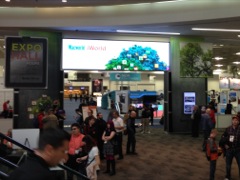 Well, I have made it home safe and sound from my annual pilgrimage to San Francisco for Macworld/iWorld 2014. It sounds like I just managed to avoid a crazy storm, but between flying out of the Oakland airport for the first time and enjoying a propeller plane ride between Seattle and Vancouver, it all worked out.

I always enjoy my trip to the Macworld show. It is a great opportunity to chat with vendors, fellow technology geeks, and DocumentSnap readers.

There was a lot there, but here were some of the highlights for me personally.

I don’t know the numbers, but I felt like the show floor was a bit smaller this year. Some vendors that are usually there weren’t, but that’s OK. There were new ones to take their place.

As usual, the Fujitsu ScanSnap booth was hopping. I tried to keep my harassing them to a minimum because they were always talking to customers. From what I heard, there was a lot of excitement about the ScanSnap SV600. It sounds like it is doing very well for them.

Speaking of packed booths, the Transporter booth was completely insane every time I walked past. This picture doesn’t do justice to how busy it was. They were doing a lot of demonstrations of how the Transporter works, and the Transporter Sync in particular was the center of attention. It was my first time seeing one live. I had an interesting chat with the Readdle folks. I am a big fan of their apps like Scanner Pro and PDF Expert.

It is really interesting how they are creating an ecosystem with their apps, so watch out for a future post about that.

I have no idea why, but I haven’t given Backblaze a lot of virtual ink on DocumentSnap over the years. Part of it was my (completely misguided) belief that it was Mac only.

I have no idea why I thought that, but Backblaze is in fact cross-platform with native Mac and Windows clients. They had their famous storage pods there, and it turns out the guy I was talking to at the booth was the CEO, Gleb Budman. His passion for the product and secure online backup was great to see.

As an aside: this is one reason why I love going to shows like Macworld. You get to talk to the people that run and make the product.

Canon had a booth for their scanners, so I dropped by and annoyed them. I came away very impressed with the imageFORMULA P–208 which is very small but can take 10 sheets (!) and scan double-sided (!!).

They gave me a hard time about writing too much about ScanSnap, and I gave them a hard time about not letting me know about their new products. Hopefully we’ve made up and between the two of us I’ll have more Canon coverage going forward.

I dropped by the NetHero booth for a demo of their product that helps you diagnose, manage, and tune the devices on your network and see where you have network issues.

I have some disaster areas in my house wireless-connection wise, so I am hoping to give NetHero a try to try and fix that. It looks very cool, and is free. FileThis was at the show demonstrating their service that will help take the annoyance of signing up for paperless billing. Instead of you having to go in and download all your statements, it can grab them for you and save them to your computer or the cloud service of your choice. I use it to automatically download my Amazon statements and it works really well.

As usual, there were all sorts of sessions on every conceivable topic around using and managing your Mac or iOS devices. I wasn’t able to make it to as many as I would have liked, but here were a few highlights.

David Sparks and Katie Floyd from the Mac Power Users podcast (of which I had the pleasure to appear in episiode 172) did a great session running through their favorite tips from throughout the years.

Long time MPU listeners will be familiar with most of them, but I learned a few things, like how to reboot a Mac automatically even with FileVault enabled (nice).

I think they may have finally convinced me to get around to trying OpenDNS.

There are few people who have contributed to the technology geek community as much as Brett Terpstra, so I was excited to see he was doing a session of tips.

He didn’t dissapoint, and I learned a lot. Did you know that Emacs text shortcuts were available almost everywhere you type text on a Mac? I did not.

The final session I attended was by David Sparks on… going paperless.

It was a great session, and he did a live scanning demo. Brave man. For whatever reason I have not yet tried out PDFpen Scan+, but I think David has finally convinced me.

Unfortunately, I had to leave for home on Saturday morning so I was not able to attend the Saturday events.

This made me very sad because my friend Jean MacDonald from App Camp For Girls put on a reportedly amazing session.

I’m extremely sorry I missed it.

The lack of women in the technology industry is an important issue, and it is awesome to see organizations like ACFG addressing that.

I had an excellent time at Macworld/iWorld and am glad I made the trip down to San Francisco. Thanks to the organizers, vendors, and presenters for putting on a great show.

[…] my trip to Macworld/iWorld 2014, one my first stops was the Readdle booth. My goal was to get an answer to a question that has been […]