The 2012 Survey Results Are In

The 2012 Survey Results Are In 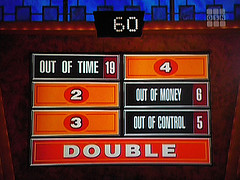 In December, for the third year in a row, I did a survey of DocumentSnap blog readers and readers of the now bi-weekly DocumentSnap newsletter.

I have found this very helpful each year, and last year for the first time I shared the results of the survey with you. Seems only fair.

In the surveys, I asked three key questions:

The main reason I share the results with you is that I want you to know that whatever feelings, reservations, or challenges you are having around going paperless, you are not alone.

Here are the results for this year.

What Is The Biggest Problem? 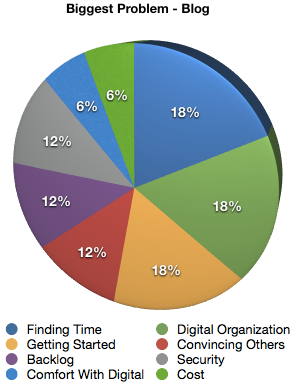 Much like last year, organizing your electronic documents and finding the time to do this paperless stuff are at the top of the list, but joining them this year is just getting started.

Digital organization is a perennial big topic which is why I created the Paperless Document Organization Guide. However, there is clearly still work to do.

It is interesting that getting started has increased as it has. It was the topic of getting started that led me to write We Are Our Own Worst Enemy When Going Paperless, which ultimately led to the creation of the Paperless Action Plan. I’ve been receiving a number of waiting list requests for that one lately, so I think it is soon time to do another session. 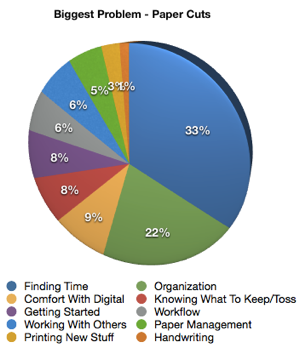 The heavy hitters from the Paper Cuts newsletter community are the same as last year, but this year finding time leads by an even larger gap.

This is one area in which I dropped the ball in 2012 – I did not do enough[1] to help you guys on this obviously important topic. Look for me to make that right in 2013. 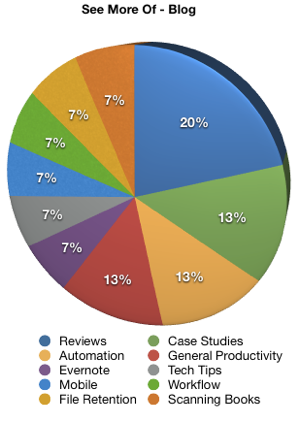 Interestingly, quite a few of you wanted to see more software and particularly hardware reviews. One of my goals for 2012 was to expand the range of hardware that I wrote about, so I put together some reviews for Canon and Doxie scanners. I’ll see if I can increase that even more.

Case studies are always a popular topic, so I started the DocumentSnap Reader Stories series. I haven’t had many stories submitted recently, but I will try to drum up some more in 2013.

Being an automation geek, I liked seeing that automation is something that many of you want to see more of. I held a webinar on Hazel, but look for me to increase the automation blog posts this year. 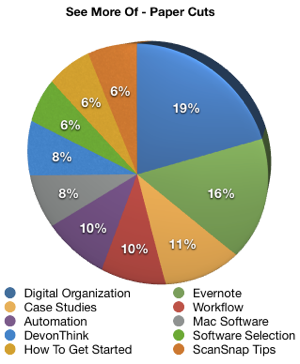 Digital organization is the big winner here (surprise!), but I was interested to have many of you asking for more Evernote tips. To be honest, I have been afraid that I have been overdoing it on Evernote stuff in the past few months.

I have something in the works for you Evernote users, so stay tuned for that. 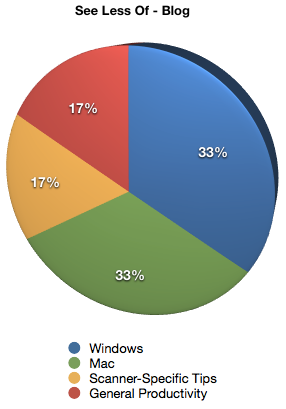 I was very honoured that there were very few entries in the “Less Of” category. 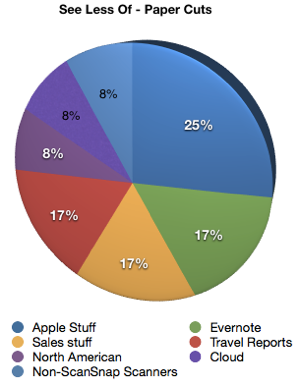 Again, there were very few responses in the “Less Of” category. Some Windows and Android readers would like to see less mentions of Apple stuff, so I will see what I can do there. I did pick up an Android device in 2012, so I will try to up that coverage in 2013.

I also had a few readers saying they’d like to see less travel reports. I did a bananas amount of travel in 2012 (for me), so for trips that were relevant to the DocumentSnap audience I reported back. I’ll try to keep that more to the blog. 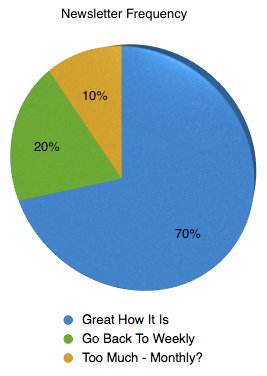 For years, the DocumentSnap Newsletter was weekly. I had never received complaints about that, and whenever I had asked readers at conferences if it was too much they always told me that it was perfect.

However, I always worried that maybe it was a little too high volume, so as a test, I started doing it bi-weekly part way through the year.

In the survey I asked the newsletter community what they thought, and it looks like I made the right call. I do want to say thank you to the 20% of you who said you wanted it weekly again. It’s humbling and not every day you have people asking you to receive more e-mail!

I want to express my deep appreciation to everyone that has provided feedback throughout the year. I will do my best to make the blog and newsletter better and better for you.

I have some great things planned for 2013, and if you have anything you’d like to share, feel free to leave a comment or hit me up any time. Have a great and as paperless as possible 2013!

[…] PS- It is only fair that you get to see the survey results too. If you want to see what came out of last year, read all about it. […]

[…] of DocumentSnap blog and newsletter readers to find out what their biggest challenges are, and this year finding time was the big […]

'Digital organization is a perennial big topic which is why I created the Paperless Document Organization Guide. However, there is clearly still work to do.'

I really hope you will take this to a higher level in 2013!