So you’re hanging out in Normandy and decide you want to conquer England. You eventually find out that conquering a country and running it are two different things, and this is what William, Duke of Normandy faced after the Norman conquest in 1066.

You might be thinking “what the heck does this have to do with going paperless?”, but longtime DocumentSnap readers will know that I have a thing for featuring interesting scanning projects.

For a very brief period of my life I was a British History major in University, and in fact my old textbook made a cameo appearance in my ScanSnap SV600 review.

Back to William. It may surprise you to learn that back in the 11th century there was no property assessment database, and if you are going to rule a country it is helpful to know who owes you how much in taxes.

In Christmas 1085, the ruler now known as William the Conqueror gathered his counsellors and they decided to do something crazy – they sent men all over England and Wales to find out how much each landowner owned and how much it was worth.

By 1086–1087 this work was compiled into a manuscript called the Domesday Book. I recently came across a project called Open Domesday which has a free online copy. 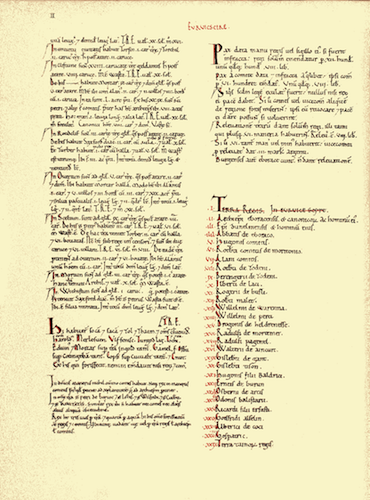 By the way, according to Wikipedia (which is never wrong), the reason it is called the Domesday Book is because its information is like the Last Judgement – unalterable. Sounds like things haven’t changed much.

The cool thing about Open Domesday is that they’ve merged it with Google Maps data. You can enter in the name of a place in England or a postal code, and it will show you all the Domesday data.

For example, I entered BA1 1LZ in the search box, which is the postal code for the Pump Room Restaurant in Bath.

Open Domesday shows all the Domesday places within 5 km. If I drill down to Bath, I can see that there were 154 households surveyed, and the property had a value of £66.1 in 1066 and 1086 (so much for buy and hold investing). Before William took it over, the land was owned by Queen Edith of Wessex, who was the richest woman in England at the time.

If you click on the image, you can see the page from the Domesday book itself.

Again according to Wikipedia, “No survey approaching the scope and extent of Domesday Book was attempted until the 1873 Return of Owners of Land…”.

What is all this useful for? For you, possibly nothing, but it is cool that it is being preserved and used in new ways.

Do you have any other cool scanning projects? Please leave them in the comments.