Last week I traveled to San Francisco to attend Macworld Expo 2011 at Moscone Center West. As the name of this post implies, it is the first time I have attended Macworld, and since a number of DocumentSnap readers asked me to let them know how it went, I decided to share it in a blog post.

The executive summary? I enjoyed the conference and got a lot out of it. There is a sense of community there that you don’t get in many tech conferences.

Like most expo-style conferences, there is a big show floor where vendors have their booths. From talking to other people, this year it is much smaller than in years past, but it was big enough for me. I have heard people describe it as the “iPad Case Floor”, but I don’t think that description is entirely fair. There were lots of iPad accessories to be sure (more than iPhone), but there were lots of other booths as well.

One thing that was interesting to me is that even though it was “Macworld”, many of the vendors in attendance had products that were cross-platform. To me, the show floor was more “nerdvana” than it was “macvana”.

Many of the large vendors that have been there in the past like Adobe, Canon, and (yes) Apple have pulled out of the show, but I personally was not walking around thinking “I sure wish Adobe was here”. There were enough smaller vendors to make things interesting for me.

Regardless, the show floor was packed with people whenever I wandered the floor. I have no idea what the attendance numbers were in comparison to past years, but there were lots of people there at all times. 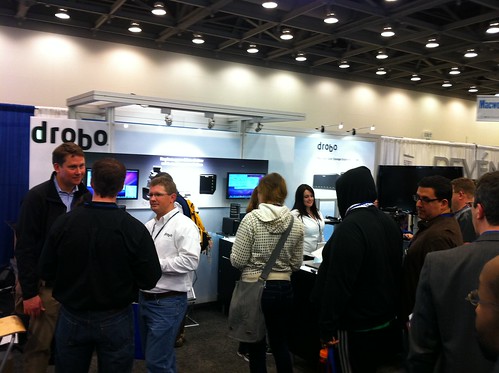 Every time I passed some booths like the Drobo, it was packed.

Another popular booth was, of course, the ScanSnap booth. It had a prime location right at the center of the floor. 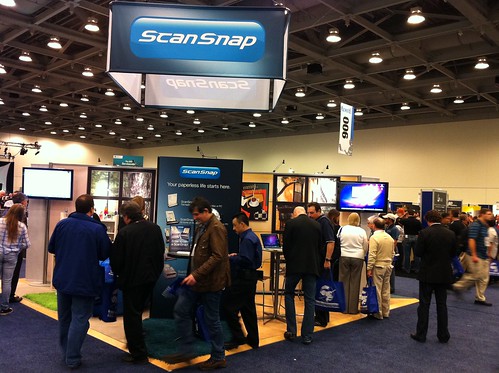 Whenever I walked by, it was busy. In fact, it might have been a bit too exciting for this person: 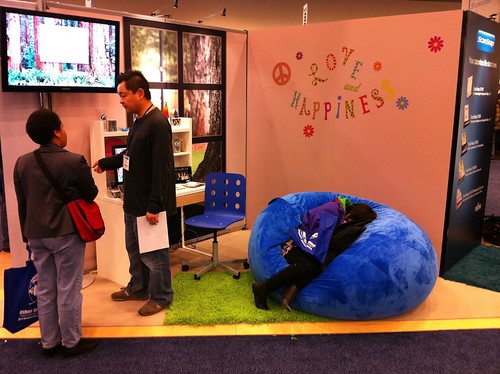 By far the most impressive booth at the Expo was the TV Hat. 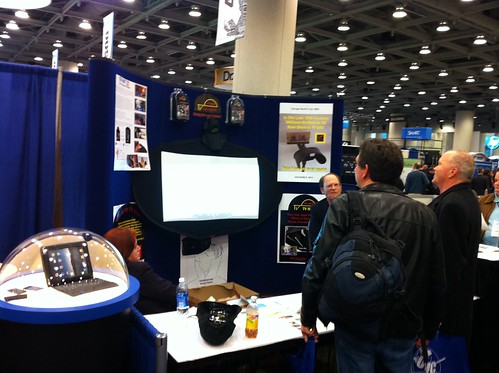 You know you want it!

The booth of the Omni Group was always popular, and I am getting closer and closer to dropping the cash for OmniFocus. Merlin Mann, a big inspiration for the creation of this site in the first place, was there giving OmniFocus demos.

I attended the User Conference, which consists of hour (or so) long sessions on a number of tracks.

The only problem was I wished I could be in multiple places at once. Sometimes it was hard to choose which to attend.

Fortunately, every session that I attended I learned something that I can put to use right away. I checked out some fantastic sessions by Don McAllister of ScreencastsOnline fame, David Sparks from MacSparky, Andy Ihnatko, Victor Cajiao from the Typical Mac User Podcast, and many more.

I also attended Katie Floyd‘s session on Going Paperless, which was one of the best presentations on going paperless I have ever seen. She did a fantastic job covering all the bases and I picked up a killer tip that I will be sharing in a future blog post.

There were a number of featured attractions at Macworld. The headliner was the comedian Sinbad. I heard his set was hilarious, but the combination of me being starving and this lineup meant I had to skip it: 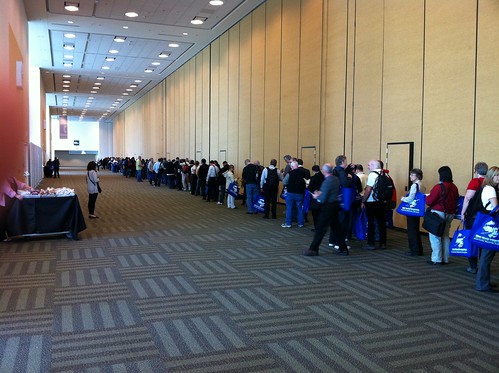 I did check out the iFixit presentation in which they took apart a Macbook Air live on stage. It was highly entertaining.

There was also a “Macworld Live” stage on the show floor. Some notable Mac podcasts recorded episodes live there, including my favorite Mac Power Users. 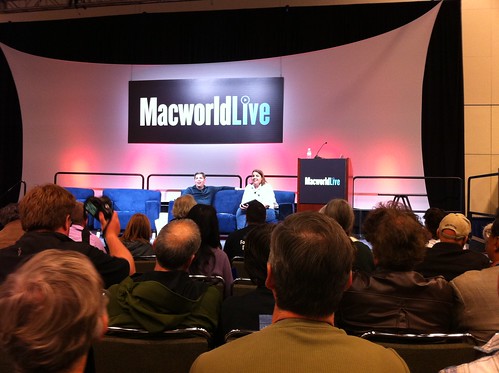 In addition to the business end of Macworld, there is a big social component. There were a number of parties and meetups going on.

One that I attended was Cirque du Mac, which is “invite-only” but it isn’t too hard to score tickets from the sponsors. I received mine from Smile Software in a Twitter contest. Thanks!

It was a great time, highlighted by the amazing Macworld All Star Band, a group of Mac writers that performs once a year at Macworld. They were incredibly tight. 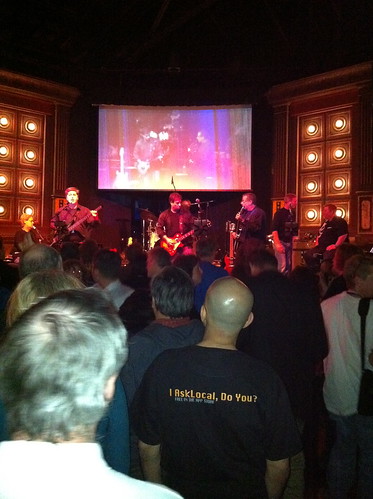 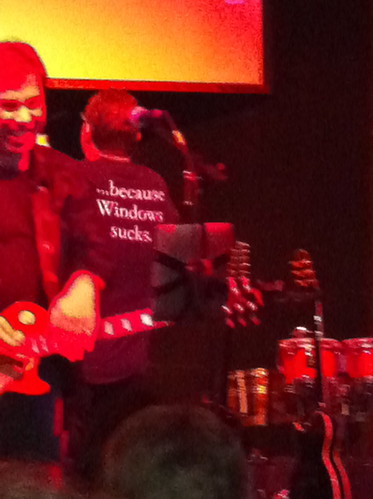 I also hit the TUAW meetup, which was fun. It was great to meet their writers and hear how they do things. It was sponsored by HP, so they were showing off an HP Envy printer. People were printing photos from their iPhones to the printer, and much hilarity ensued.

On the show floor, I went and tried to bug all the paperless vendors. Some of them I will have individual posts for, but here are a few highlights.

Neatco had a very popular booth for their NeatDesk and NeatReceipts scanners and they had a visitor: 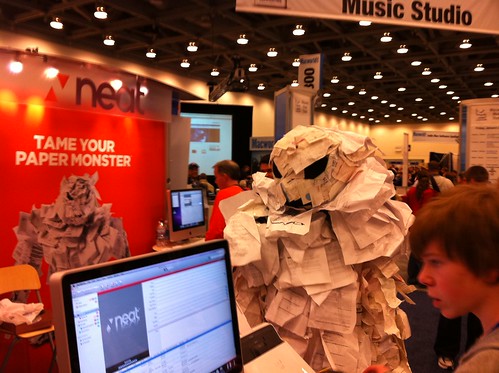 I was talking to the folks there and it sounds like they will have lots of good things coming in 2011. I’m looking forward to seeing what is coming.

Fujitsu was giving out ScanSnap S1100s, so that was drawing quite a crowd as you can see. 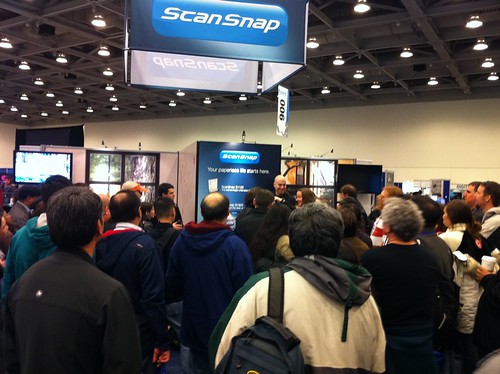 I have to admit, I was not too familiar with the iVina Bulletscan before the show, but I talked to their CEO and had a demo of their scanners and they look pretty good. I hope to try one out myself and report back to you. 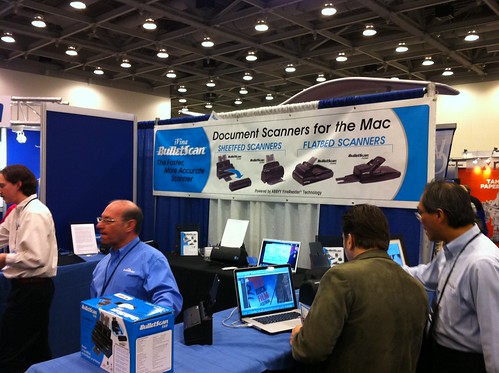 Evernote was there sharing a booth with the Livescribe folks so it was good to meet the Evernote folks finally. 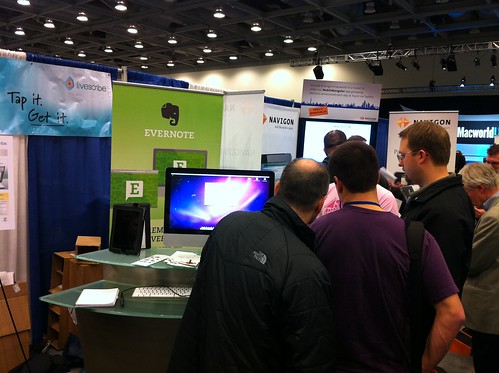 The folks from I.R.I.S. had a really busy booth showing off their range of mobile and pen scanners. One that sounded interesting is the Iriscan Anywhere which lets you scan documents without having to connect it to your computer. 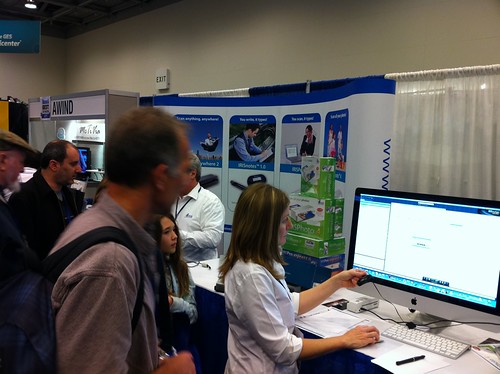 As I mentioned earlier, the sense of community at Macworld Expo was apparent. I talked to a number of people who, when I told them this was my first show, said “Wow! This is my 20th!”. I thoroughly enjoyed meeting people I had only talked to online in the past. I’m not sure what direction the show will take in the future, or if the big names will ever come back, but I am glad that I went.

[…] Macworld Expo 2011: A First Timer’s Perspective Last year was my first time at Macworld (now called Macworld|iWorld). This was my report. […]

Yeah, I don't use Things or OF but I hear there are a lot of Things users making the switch specifically because of cloud syncing.

OF looks cool but it is so pricey, especially when you factor in the cost of the iPhone and iPad versions. That being said, I am a big believer in "look at what people you admire are using", and so many smart people seem to be living and breathing in OmniFocus.

If Omni had had a show special discount I probably would have jumped on it like the impulse purchasing zombie that I am. 🙂

Great blog! Why did Apple and other large vendors drop out of Macworld? Thanks for the iVina mention. Those are Xerox DocuMate scanners customized (in black and with Mac software) for iVina. The BulletScan S400 looks to be between the DocuMate 152 and 162 feature wise but sells for about $200 less. That's pretty good considering you have to pay $100 for ExactScan Pro to get Mac driver support (Xerox doesn't support Macs on any of these scanners). The company that makes ExactScan (also the creators of DevonThink – I'd love to see you do some posts on that) also puts out their own custom brand of Xerox scanners with Mac drivers although they are priced higher.

That line for Sinbad was crazy. My friends will find that amusing since he's considered washed up.

Thanks. I am not sure exactly why the big companies have dropped out. Apple reportedly dropped out because they didn't want to be tied to Macworld's timeline for their product announcements. Steve isn't going to get up on stage and say "Hi guys! Nothing to report this year!".

I suspect the other biggies dropped out after Apple did, fearing that it wouldn't be worth their while without Apple there?

Thanks for the tips on iVina and Xerox and DT. What a tangled web.