Do You Know Where Your Online Backup Is?

Do You Know Where Your Online Backup Is? 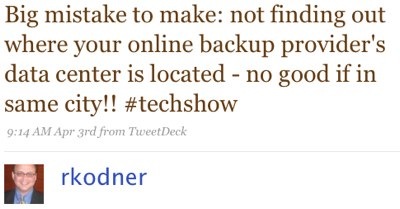 Recently I came across this tweet from Ross L. Kodner and he brought up a good point – one of the benefits of an online backup is having your data safe and sound.

If you live in a city that is prone to earthquakes, hurricanes, etc., it kind of defeats the purpose to have your online backup residing in the same city as you.

To that end, I have put this list together of where common online backup vendors have their data centers. Not surprisingly, none of them were willing to give this information on request so this is mainly pieced together from some Google-fu. Therefore, I can’t 100% say for sure that it is accurate, but you get the general idea.

Jungle Disk (S3)/Dropbox
Jungle Disk and Dropbox both use Amazon’s S3 service. While Amazon generally does not disclose where their data centers are, the following are the edge locations for CloudFront, their CDN, so it stands to reason that S3 data is stored there too.
United States

Jungle Disk (Rackspace)
Since Jungle Disk was acquired by Rackspace, they have started offering storage in Rackspace’s data center too.

Where is your data?

About a minute you are exploring the Internet
along with the following your computer is performing such
as for instance a drunken street-corner preacher; spouting off junk
and operating horribly. Easy and simple action to take is to utilize online-backup
storage to make a duplicate of most your data – that way,
all your info is supported an ready patiently inside the cloud for you personally until
you require it.

I do not want to repeat this website, but I really just like the theme. Could you touch upon which template are you using or was it customized for this blog?

It might be quite misleading here. Some companies have multiple data centers, but it doesn't mean these data centers are used for redundancy.

The problem with consumer types of services like $50/year for unlimited data backup, you cannot really expect that they backup data across different data centers. The cost associated with that makes it completely impossible.

DriveHQ.com is one of the leading online stoage, online backup and FTP server hosting service providers. Our data center is located in Fremont, California.

Thanks for the post about DriveHQ. I wasn't familiar with the service. Thanks!

…with SafeCopy you can backup an unlimited number of computers to one account.