Could You Chop And Scan Your Books?

Could You Chop And Scan Your Books? 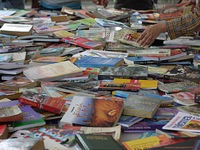 There’s a really interesting article over at the Chronicle of Higher Education about a project by Professor Alexander Halavais’.

Books take up space. That’s a problem for any librarian tasked with finding room on overcrowded shelves. It’s also a problem for a book-loving scholar who lives in a small New York City apartment with a toddler and more than 3,000 books. Under those conditions, something’s got to give. Chances are good it won’t be the toddler.

“First I cut the boards off, and then slice the bindings. I have tried a table saw, but a cheap stack cutter works better. Then I feed [the pages] into my little page-fed scanner, OCR them (imperfectly) using Acrobat, and back them up to a small networked attached storage device.”

As of September, he as 1,000 books in. He’s written a blog post about the process.

It’s funny how cutting up books can provoke such a reaction (see the comments on the Chronicle article: one commenter called it “cannibalism on such a grand scale”). When I think about doing it, my initial reaction is “I can’t do THAT”. However, if I really had to do it, I think I could, at least for the books I am not really really attached to.

How about you, could you take a stack cutter to your books? Anyone done it already? Leave a comment and let us know how it worked out for you.

I would reccomend using the ScanSnap SV600 that scans books and then I would sell or give the scanned books to someone else so they can enjoy them.

[…] had to point them to machines with mixed reviews, machines that cost thousands of dollars, the old chop n’ scan, or a DIY solution. None of the options were […]

I just did this recently with a book I need to study and use as a reference for my work (Craniofacial Pain Assessment and Management..a real page turner :). The book measures about 7" wide by 10" high and had just over 250 pages ( 125 single pages ). The book is paperback so I held it together with 3 binder clips and took it to Office Depot. For .75¢ they chopped off the spine.

I scanned it using my my ScanSnap S510M, using Acrobat I placed markers for the Chapters etc. ( I didn't OCR the file). I have the book in PDF format and use my .99¢ GoodReader App on my iPad to access the book several times per week.

When I was finished scanning the book, I took it to FedEx/Kinkos and had them spiral bind it for me. The cost was just under $10.00. I dropped it off on a Saturday afternoon and picked it up Sunday morning. I keep that copy of the book at the office so other staff members can use it.

When I have time, I'm definitely going to scan more books.

Thats a great example Ann, thanks for sharing! I guess you didn't need to OCR because you could just flip to whatever chapter you wanted?

Wow! As a book lover and someone who is also an Indie author (my debut book is due out this week), I don't think I could do this. The thought of chopping up Harry Potter? No way! Some books are meant to stay on my shelf. Others? With the price of ereaders dropping, it's much easier to just buy digital for new books and donate those that I no longer want/need. And, scanning in all those pages? It'd probably be cheaper to just purchase digital copies of those I HAD to have but absolutely couldn't keep the actual book. BTW, this week is sort of a 'go paperless' week in publishing. It's Read An Ebook Week!

Buying new digital copies is certainly a viable idea, Michelle, but what if there is no digital version available yet?

As for the expense and effort, assuming you already own a scanner, the marginal cost is minimal. I just did a 400 page book. I paid $1 at a popular chain office supply store to cut off the spine, and less than a half hour scanning with my DocumentSnap. The computer took a fair bit longer to OCR it all, but that step required no human intervention.

Good tip about having an office supply store chop the spine. I didn't think of that.

Perhaps more noteworthy is that I went in prepared to explain just how I needed them cut, but the young lady in the printing department (where they do that sort of thing) was already familiar with the concept and in fact experienced in the act of chopping spines off of books. Apparently I was not their first customer for that service!

Then yes, then I certainly see your point. I just couldn't… LOL! The thought of chopping off the spine of J.K. Rowling or Shirley Jackson's books just makes me shudder. But, your method does sound like the best/quickest (most painless?) method.

The Plustek Optic Book scanners are designed to scan books without the need of cutting them down.
Of course, on the other hand, it's fully manual and pages have to be scanned one by one … but the book will remain nearly fully intact in the end.

Good point about the Plustek. Do you have one? How are they?