It looks like Fujitsu is taking on the ultra-portable scanner market with a new model that is smaller than the aforementioned S1300.

One cool thing it can do is switch between “Straight Path” and “Continuous Path” feeding, so you can either have it flip over a document for dual-sided scanning, or feed paper, business cards, or even ID cards (a highly-requested feature) straight through without bending it.

It also looks like they are embracing the “cloud” and will have some sort of functionality to scan to Google Docs, Evernote, or Salesforce. It’ll be interesting to see how that works. 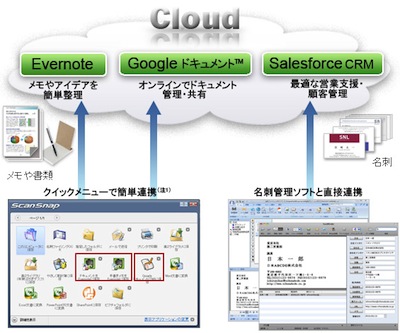 Fujitsu has a video on their site (11 Meg WMV format only, unfortunately) that you can see here. It’s in Japanese, but you get the idea.

I have no idea when/if the ScanSnap S1100 will be coming to North America (though I do have my theories). Stay tuned here and you will be the first to know.

Sounds neat. I presume at that size it is a single sheet at a time; no ADF. Still, for somebody for whom size is most important, and who only scans one or a few pages at a time it should be excellent.

While not a "cloud" user myself, I wonder if they will upgrade current ScanSnap software to include cloud integration?

Good question about the software. It also looks like the Japanese S1100 comes with a bunch of software that I've never seen before. I just didn't mention it because I am not sure how much of it will make the jump to North America.