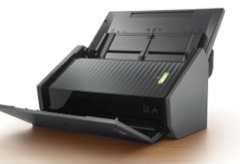 Since the 2013 Evernote Conference, I have received many many (did I mention many?) e-mails asking me what I think about the new ScanSnap Evernote Edition.

Frankly, I have resisted posting about it because there hasn’t been much information about it. I had to miss the conference this year, and I haven’t tried it myself.

Evernote has now fleshed out their FAQ page, so it is more clear how it all works.

The ScanSnap Evernote Edition is clearly a re-branded ScanSnap iX500 with a more “Evernote-y” look and a green light instead of ScanSnap blue.

The big change is the software. There is a “ScanSnap Manager Evernote Edition” that I understand the Evernote folks had a big hand in designing.

It runs in the background, and when you scan, as far as I can tell it will detect the type of document you are scanning and then upload it to the appropriate notebook in Evernote.

By the way, in the interests of science I installed the ScanSnap Manager Evernote Edition and tried using my iX500 with it. No luck. Drat.

When the device was first announced, my first thought was “what if you want to scan outside Evernote?”

It appears that there is an Advanced menu where you can tell ScanSnap Manager to save your scans to a certain folder. It doesn’t appear that you can set it to scan to other applications, but I could be wrong on that.

I want to reiterate that I have not tried the ScanSnap Evernote Edition myself, and I have not been able to get Evernote to answer any questions about it.

If your destination for scanning is Evernote 99% of the time, it appears that this is an extremely seamless and easy to use experience. The hardware is certainly a no-brainer, being a rebranded iX500.

Personally, I like the flexibility and future proofing of being able to scan to wherever I want, including Evernote, so I would stick with the regular old ScanSnap iX500. You know your usage best.

Has anyone tried or considered it? I’d love to hear your thoughts in the comments.

My Choice of Scanner for Going Paperless | Tech and life - February 19, 2015 Reply

I’m just about to buy either the Evernote edition, or the IX500. The former is a lot more expensive, plus shipping, and a wait for it to come into the country, so obviously I’d prefer to spend my money on the Fujitsu branded one!

Having watched that helpful youtube video (thanks for the link martign!) it appears that I can do everything just as well with the Fujitsu branded product – my only question, is there any difference in the way either handles multiple documents? I have vast amounts of documents to scan and am wondering if both will put things into their own ‘note’ in evernote, or whether it’s only the Evernote version that does this, and I would have to do each document separately with the IX500?

Thanks!
I’ll update in a few weeks when I’m underway.
Cheers.

Strongly considering the Evernote Edition (I’m a newbie to heavy duty scanning and paperless office, but I’ve been living my life on Evernote so it seems like a good fit).

A quick question: if I have no interest in business cards & photos (I don’t), can I set those categories renamed to something else? And does it have to restrict to those specific sizes? Or can I basically have any different folders for sorting based on paper size?

Also, are there any other quick ways to enable sorting based on text on the document itself? Is there even a need to sort my documents into folders? I’m kinda hoping I can scan EVERYTHING into a folder called “file Cabinet” and then just take out my ipad use the search functions (premium member- can search text in PDFs) to look things up in my new virtual ‘filing cabinet’.

Is this realistic or am I clueless as to how this stuff works? I’m a bit nervous about this transition….

Hi Joey, I still haven’t used the ScanSnap Evernote Edition myself, but here is my understanding:

1) My understanding is that the SSEE has predefined sizes of paper that it looks for (Business card, photo, document). You can set those to go to whichever notebooks you want, but the SSEE is limited in its paper size detection/filing to those. Someone please correct me if I’m wrong.

2) You can’t sort by text within Evernote. You can do it with a “normal” ScanSnap using a tool like Hazel and some AppleScript though.

3) Many people do just dump things into one Notebook and search. Whether you can do that or not depends on how comfortable you are with searching. Some people prefer more elaborate filing systems, some less. It comes down to personal preference.

Having used it for more than a year now (the SSEE I mean), detecting the document type is not about size but about content (which leads to mistakes, but not often and I admit content of french receipts and so on can be misleading to a machine).

This is a wonderful post for those with a regular Ix500 and wanting to do direct scanning into evernote. http://www.youtube.com/watch?v=DZArRBtPHvU

I, too, was disappointed that I had purchased a stock IX500 a couple of weeks prior to getting the EE notification. I was hoping I could "retrofit" to get the additional functionality. After reading everyone's comments here I feel MUCH better that I missed the boat on this one.
Thanks guys!

Thanks for additional insight, I have been waffling back and forth for 2 months.

I was bummed when I first saw this released but now I'm glad that I have the stock IX500. I read the Evernote FAQs on the differences and there is A LOT that the EE doesn't do (like wireless scanning to a mobile device) that made me shocked that they would release an edition of this wonderful scanner that does LESS. Seriously? Plus I couldn't give a hoot that it sorts them into those folders. I don't use business cards or scan pictures with a doc scanner. Also, sometimes I want to scan directly to another device or service. Lastly, I only scan directly to Evernote for things I don't want a local copy. I can scan to ScanSnap Manager where a hard copy is stored as a single file and then from there send it off to Evernote with a click of a shortcut button. I doubt I could do most of that with this edition. I think this was a rush to populate their new Market.

The reason I'm sharing this is because the product id and vendor id would have to match the standard iX500 in order for the standard ScanSnap Manager to use it.

Of course I could probably get all hack-sy over here and play some games to force that to work, assuming of course that the firmware works enough the same to fly – but well…I'd like to see Evernote step up instead.

Right away – this device doesn't work the the ScanSnap Manager 6.0 software that you'd use with the ScanSnap iX500. You have to use ScanSnap Evernote Edition.

The sorting is "meh". It is totally based on paper size, which makes it somewhat useless. Doesn't do a good job of telling a single multi-page document from a stack of disparate documents. In fact, in the Evernote Forums they suggest sticking business cards and such in between documents. :

Honestly – I'm going to hold my breath for a bit because I have faith in the Evernote developers to get this right, but the fact that I can't set up different scanning profiles, and that I can't just switch and use the stock ScanSnap Manager where this one fails really, really bugs me. 🙁

I could go on and on, but I want to give Evernote a chance to make this right. So far I'm kinda regretting not sticking with my old ScanSnap or getting a stock iX500.

Thanks so much for sharing, @numbski! I was hoping you'd be able to use regular old ScanSnap Manager with it, but I guess not.