I just got back from a quick road trip to Portland (love Powell’s), and I had a nice surprise waiting- a review copy of the NeatDesk scanner from Neatco. There is a Mac and Windows version, and I will be reviewing the Mac version. 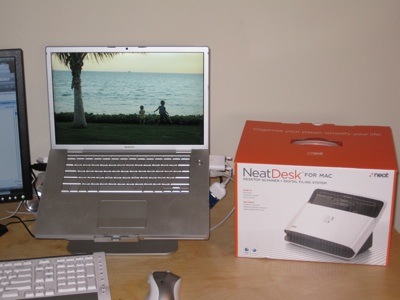 I’ve gotten a number of requests from readers asking me to check out the NeatDesk scanner and NeatWorks software, so I’m thrilled that Neatco came through and sent me one to check out for you guys.

Setting Up The NeatDesk

I shot a quick unboxing video that shows what is in the box. Here you go:

Setting the NeatDesk up was pretty simple. There is a paper exit tray that does not actually attach to the scanner; it just sits under it. So you put down the exit tray:

Then sit the NeatDesk on top: 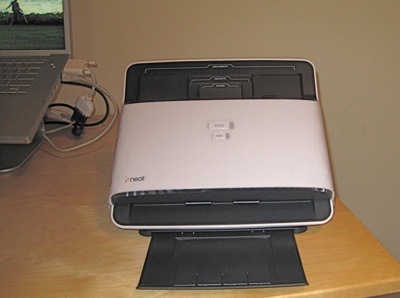 Then, you install the included NeatWorks software, and plug everything in.

The first thing the instructions say to do after setting up the NeatDesk is running Calibration. In fact, in the Quick Start Guide, they actually give you special calibration sheet that they recommend that you use: 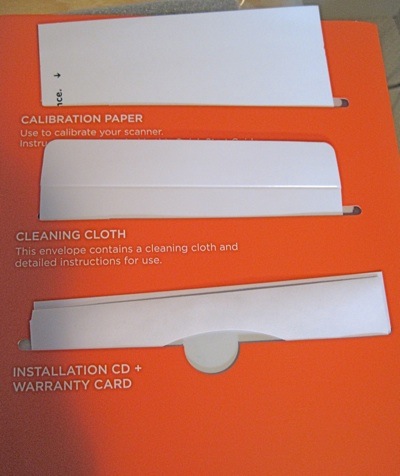 I put in the calibration sheet and clicked the Calibrate button onscreen, and the process started: 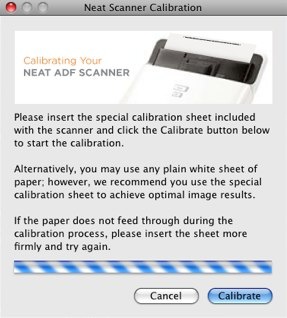 At that point, I hit my first snag (well, second if you don’t count the fact that I didn’t notice the power button). The paper started feeding through, made some noises, and than halfway through… nothing. Both lights were blinking green but nothing was happening, and eventually they turned to both blinking red.

I did some searching on NeatCo’s forum and found that some Mac users were experiencing the double-blinking issue when doing multi-page scans. I tried calibrating again and this time it worked perfectly, and I didn’t hit the issue again. 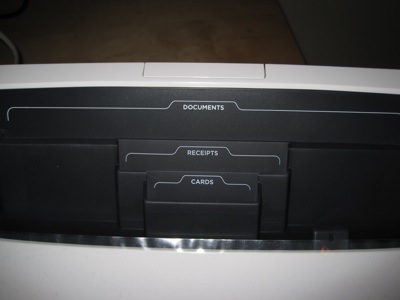 If you scan mostly documents, it probably makes sense to take that out which is very easy to do. Once you take it out, it holds 50 documents.

As a first test, I scanned a stack of documents of different sizes, and 2 receipts, and 3 business cards using the paper input tray.

The scanning went quite well. Speed was decent, and the resulting images were excellent quality. There was one issue- it picked up the 2 receipts at the same time, which is a bit of a drag.

Here’s a video of the test:

By the way, one annoying thing. In the help it says (in bold no less) to scan the paper face down, but you actually have to do it face up.

My ScanSnap S300M does not like long receipts, and threw an error message when I tried scanning one particular one. I tried the same receipt in the NeatDesk scanner, and while it didn’t throw an error, it didn’t scan the whole receipt either. It just cut off 2/3 of the way down.

The NeatDesk comes with one piece of software called NeatWorks, which is also available separately (for the Mac anyways).

I will do a separate post about NeatWorks, but in short, I really like the program. It attempts to read and classify the documents that scan in, and while that part of it isn’t perfect, at least it is a start. The OCRing and Spotlight integration (on the Mac) is cool too.

Because I Know You’re Going To Ask…

Obviously the question everyone will be asking is “how does it compare to the ScanSnap?”. Since I only have a ScanSnap S300M and not the S1500M, I didn’t think it was fair to do a side by side. I do have a few thoughts however.

The NeatDesk is a great scanner and I like it a lot. Is it as fast as the ScanSnap? No, the ScanSnap is a bit faster, especially when scanning color.

I think Neatco could improve the simplicity aspect too. With the ScanSnap, you install the software, plug it in, and hit one button and you’re going. With the NeatDesk, having to line up the exit tray, plug it in, turn on the power switch (which the ScanSnap doesn’t have), then go through the whole calibration thing is a bit of a hassle.

Having said that, the NeatDesk does have some improvements. The paper input tray is a great idea for keeping paper types separate. I really like how they included the cleaning cloth with the scanner- awesome touch.

The best part, in my opinion, is the tight integration with NeatWorks, which is a great program.

I also like how in the quickstart guide, Neatco has a “Community” page which outlines the support options, forums, tutorials, live chat, etc. It just gives the impression that if you have any questions or issues, Neatco would be there.

Do you have the NeatDesk scanner? How do you like it?

I HATE IT. I can not export documents to e mail or anywhere for that matter. It is not user friendly.

I bought a Neatdesk a few months ago. Nothing but problems. Scans 1/3 of the document, sometimes won't scan at all

Yikes, was support able to help out? I've noticed they are fairly responsive on their Facebook page.

I'm trying to decide which scanner to buy. It sounds like most people like the Fijitsu S1500M with the NeatWorks software. Everything I've read is a few months old now. Do you have an opinion of which way to go–taking into account the software that comes with each of them too? Thanks.

I think if it was me, I'd get the ScanSnap S1500M and try it out. If I liked the software that comes with it, great. If not, I'd probably pick up NeatWorks or Yep or one of those, but not until trying the bundled stuff first. That's just me though!

Hi
The issues you are talking about here are interesting & important,
Thank you and good luck with your blog.

thanks for the review. it looks like im going to keep the scansnap for now but im looking forward to the neatco software review.

As for the receipt issue (both feed at same time), where you able to duplicate it again or was it a one time thing? Watching the video the NeatDesk did seem slow compared to scansnap.

Really appreciate you doing the review as I requested and more importantly looking forward to the NeatWorks software review.