Are You On The Tidy Or Messy Side?

Are You On The Tidy Or Messy Side? 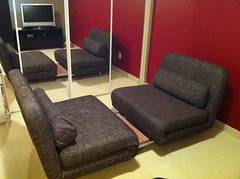 A year and a half ago, I did a big redesign of my office.

To my wife’s utter shock and awe, I have managed to keep it more or less neat and tidy during that time. As you can see in the “before” picture in that post, that was not the most likely outcome.[1]

From time to time, I receive e-mails from DocumentSnap readers referencing that post and saying “your office looks really nice, but I could never work that way”. My response is usually along the lines of “that’s great that you know that about yourself – knowing how you work is one of the keys to coming up with the best workflow and work environment for you”.

I bring all this up because, as I do every weekend during my morning walk, I recently listened to an excellent episode of the Home Work podcast by Dave Caolo and Aaron Mahnke.

This week’s episode is titled Tidy vs Messy and, as the name implies, the hosts explore different attitudes to the neatness (or lack thereof) of our spaces and how we get our best work done.

I loved this thought by Aaron on the “tidy” side:

Isn’t that the case with paper? We take it, we may or may open it, it makes it to our counter or desk and then… it sits there. Just that little bit of extra time would put it where it needs to go, but so often we don’t do it.

Of course, on the “messy” side, you have Dave:

Whether you have stuff tucked away in a cubby or you have stuff in skyscrapers on the desk like I do, as long as you’ve processed it and you’ve decided a) what it is, and b) what action needs to be done, you’re OK."

After all, we’ve all seen pictures of Steve Jobs, Mark Twain, and Albert Einstein’s desks, and they seem to have done OK.

I highly recommend giving Home Work Episode 20 a listen, and as a bonus, Aaron goes through how he has been using a Doxie Go to go paperless. Great stuff.

How about you? Tidy or Messy?

Looks great! I'd love to have a modern looking workspace like that!

I also aspire to be tidy. I clean up occasionally but entropy always seems to take over.

Messy with aspirations of being tidy! I'm in transition as I work on every piece of paper in the house and would take a guess that I have moved the 'swingometer' from 30% tidy to 50% tidy. One thing I know I do have is persistence so hope to hit the 80% mark one day – then be happy with what I have. (:

Awesome job moving the needle David! You're right that persistence is key, and I like how you recognize you need a long term vision for this stuff. It doesn't come right away, and most of us never reach perfection (whatever that means to us).<p style=”color: #A0A0A8;”>