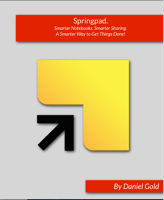 Last year, in the Evernote LinkedIn group, I noticed that there was a very enthusiastic and helpful contributor. Whenever someone had a question, he would jump in and share his experience or provide suggestions.

His name is Daniel Gold, and when I found out that he was releasing an eBook last fall, I dropped the $5 right away and bought Evernote: The Unofficial Guide To Capturing Everything And Getting Things Done.

I reviewed Daniel’s eBook, and found it quite good and picked up some helpful tips.[1]

When Daniel told me that he was releasing a new eBook and asked me if I’d like to take a look, I said absolutely.

That new eBook is Springpad. Smarter Notebooks. Smarter Sharing. A Smarter Way to Get Things Done, and it is also $5.

My approach coming in to this book is much different than Daniel’s previous book. I was a heavy Evernote user, so I was just looking for a tip or two.

With Springpad, I knew absolutely nothing about it. I decided to hold off until the company released its new version, at which point I would use Daniel’s eBook as my sole way to learn how to use it. I’m happy to say, it delivered.

My understanding is that Springpad used to be more of a direct Evernote competitor, but now with its recently-released new version, it is more like an Evernote-Pinterest hybrid.

Great, Now What About The Book?

For starters, the look is great. It has a nice clean interface, and a helpful (and pretty) table of contents so that you can jump right to the topic that you are interested in. Between you and me, I will probably be ripping that off in my future projects. Don’t tell Daniel.

The introduction starts right away with some ways that you might use SpringPad. As someone who wasn’t familiar with it, this is helpful.

He also frames right away how Springpad is different from other services:

With Springpad, it’s not just about adding notes to an online database. It’s not just your digital filing cabinet. It’s not just springing pretty pictures of things you’ve found online. It’s much more. It’s about sharing with people you trust to get more done. It’s about taking the mundane, daily activities and getting everyone (from just one person, to a group of friends, to the world) involved in your plans.

The Getting Started section takes through some of the settings that should be set, and right away points to how you can create a Backup. I appreciated that, because many people rarely consider backing up stuff on their computer, let alone information stored in a web service.

It is great that Springpad makes this so easy, and I am glad Daniel emphasized that right away.

Most of the instruction in the book is done in the form of use cases. Instead of a dry “this is what this setting does and here is how it works”, it is done by examples. “Let’s say you found a killer blueberry pancake recipe. Here’s what you’d do with it step-by-step…”. The examples definitely make it more interesting and relevant.

There are also other examples like trip planning, event planning, using Springpad on the go, and a bunch more. Even if you don’t plan to use the software for any of these specific things, if you keep an open mind you will be able to pick up tips for how to apply it to your own workflow.

I am quite possibly the worst cook this side of the Rocky Mountains, but I can more-or-less follow a recipe. His recipe examples look pretty awesome. I can see how using Springpad for this could be great.

Many of Daniel’s examples and use cases show how Springpad can be used for collaboration. It looks like the company put a lot of time and thought into this, and the eBook does a good job showing how you can use it to get stuff done with others.

Speaking of getting stuff done, the latter part of the book talks about Getting Things Done and how you can do it using Springpad. I don’t personally use it for that, but if you were a Springpad user, I can see how you could.

Any Suggestions For Improvement?

The only suggestion I would have for future versions is to talk a bit more about the sign-up process.

For example, SpringPad suggests that you follow some notebooks, so the Guide could talk about what that will do and what the implications are. Also, it prompts you to create some notebooks during signup. Should I do that now, or wait?

It wouldn’t be a bad idea to drop a section in about the sign-up process, unless I totally missed it.

Should You Get It?

As I said, I deliberately knew nothing about Springpad before reading Springpad. Smarter Notebooks. Smarter Sharing. A Smarter Way to Get Things Done, and after going through it I felt that I had a solid handle on how to use it and how Springpad might work for me.

If you see yourself using Springpad for more than just clipping images, I personally think that for only $5, it is a worthwhile jumpstart.

[…] Springpad. Smarter Notebooks. Smarter Sharing. A Smarter Way to Get Things Done!. By, once again, Daniel Gold. All about how to use Springpad. My review is here. […]

Thanks, Brooks. If you're up for it, I'd love to see a more extensive comparison between Springpad and Evernote, including perhaps a couple of examples of putting each to the test with the same use case. In any event, appreciate your work as always.

Not a bad idea; thanks!