Some Great Dropbox Uses Beyond The Obvious

Some Great Dropbox Uses Beyond The Obvious 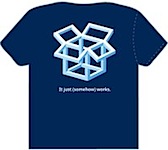 Many people know that Dropbox is great for syncing up your files between different computers.

The other day I was thinking about how in the pre-Hootsuite days I used Dropbox to sync my TweetDeck groups between machines, and I thought I’d look into some other creative uses that people have come up with.

Here are some of my favorites:

Lifehacker has two great posts about creative Dropbox uses like:

The Dropbox fan page on Facebook has a thread called “What do you use Dropbox for?” with some suggestions like:

MaximumPC has “How to Hack Your Dropbox“, with some tips, my favorite being to catch laptop thieves using a keylogger and Dropbox.

And finally, lets hear from the source itself. Dropbox has a Tips and Tricks wiki with a bunch of ideas, including:

That should be enough to get you going. Do you have any other awesome Dropbox tips? Let us know in the comments.

I was a big follower too until this device lost all of my data. They have some data integrity issues they need to solve first before I would feel safe using this device again. Their support sucks since it’s always a guy by the name of Frank on the phone, the poor guy must be working 247.