Send Only Non-Sensitive Documents To Evernote

Send Only Non-Sensitive Documents To Evernote 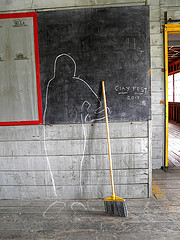 I am becoming increasingly enamored with the Technical Difficulties podcast by Gabe Weatherhead and Erik Hess.

They do a great job tackling a single topic every episode.

A recent show is about a topic that is, of course, near and dear to my heart: Scanning.[1]

During the episode, Gabe described his scanning workflow, and how he decides what goes into Evernote vs. what gets saved to an encrypted disk image:

Gabe: You put in a piece of paper and hit the scan button. For me, most everything goes to Evernote unless it has sensitive information like Social Security Numbers, Bank Routing Numbers. Those I don’t put into Evernote.

Erik: OK, so you’re totally away from your computer. You walk up to your pedestal of scanning and you just put the paper in and you hit the button. And… how does it know “Oh, there are Social Security Numbers on this so I shouldn’t dump it into Evernote.”?

Gabe: No, it still requires a human. We don’t live that far in the future. It still requires me to decide this is sensitive so this goes into the stack next to the scanner that I’ll process manually later…

This got me thinking: why can’t we do something like that? On the Mac, a tool like Hazel should be perfect for this, so I whipped up a test workflow. Something like this might be possible on Windows with File Juggler, but I haven’t tried it.

You’ll want to take some time to think about what you don’t want to go to Evernote. Take a look at your bills and other sensitive documents. What numbers (for example, SSNs, SINs, credit card numbers, bank account numbers) do you want to filter out, and how do they show up on your documents?

Next, Set Up Hazel

I set up a Hazel workflow that watches for documents in my scan inbox folder and examines them – if any of those documents do not contain the text from the list I made in the first step, it sends them to Evernote and deletes them.

If the documents do contain that sensitive information, it just leaves them alone for your future processing.[2] 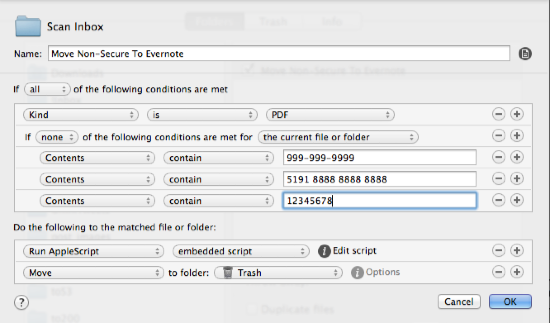 The second condition is a nested condition. To create one of those, hold down the Option key when you go to hit the Plus icon beside the “Kind Is PDF” line.

Inside that nested condition, you will replace my dummy numbers with the text you came up with in your “sensitive stuff” list.

In the Do the following… section, it will run an Applescript to add the document to Evernote.

Here is a screenshot of that step when I hit Edit Script:

Here is that code for your copying-and-pasting pleasure.

There are some limitations to this approach. The first: for all this to work, your documents need to be searchable before processing. If you do your OCR later (which I believe Gabe does), this probably will not help.

The second: you need to make sure your list in the Hazel rule is accurate. Otherwise things may go to Evernote that you didn’t intend. The easiest way to do this is to check your OCRed text when building the rule. Here is the way I do it.

Do you process sensitive documents differently than non-sensitive? What do you do?

[…] I wrote about it on the blog, and came up with one solution: a way using Hazel to stop documents with sensitive information from being saved to Evernote. […]

I am using an Offline Notebooks in Evernote and have a Import Folder for secure items to drag and drop bank statements and similar documents. That keeps them offline, but i do have to backup the *.exb file to protect the data since the information is not put on the Evernote cloud.

Wise move SteveC. You can also export to .enex, but the more backups the better. I suspect a lot of people using Offline Notebooks don't even think about that.

Why the conclusion that Evernote is no good for sensitive docs? Their security is inadequate?

I wouldn't say that so strongly. It's just that many people don't feel comfortable keeping their sensitive documents in the cloud, Evernote or otherwise.

I agree (I don't want to put unencrypted sensitive information in anyone's cloud). But — I still put sensitive docs into Evernote — I just put them into a LOCAL folder as opposed to one that synchs to the cloud. My local folders still get copied to my off-site backup facility (after they are encrypted) so they are backed up, just not present in Evernote's cloud.

Thanks a lot for those ideas. But im still in serach for a good file vault for senisitve documents.

Smart thinking and I particularly like how you've thought about the pitfalls and explained them.

I have, on multiple occasions, implored Agile Bits – makers of 1Password and Knox – to come up with a product that combines the features of those two products to solve this very problem of secure document storage.

Thanks for sharing this amazing article. It actually provides two excellent information a) the idea of how to split documents and b) a great link to a very useful tech podcast …