Do you have a Fujitsu ScanSnap and use multiple devices? Today Fujitsu has officially released ScanSnap Sync – a new feature that allows you to scan and access your documents on multiple computers and mobile devices and keep them all in sync.

What Is ScanSnap Sync?

ScanSnap Sync is a feature that is officially supported on the ScanSnap iX500 and ScanSnap iX100. I have no doubt that enterprising ScanSnap users will let us know in the comments if they get it working on other models.

If you use ScanSnap Organizer on Windows or Mac and/or ScanSnap Connect on iOS or Android, it gives you the ability to scan and save your documents on one of your computers or mobile devices, and have those documents automatically appear on all your other devices, all from within ScanSnap Organizer.

You’ve long been able to use the ScanSnap to scan to different cloud services. How is this different?

The way Fujitsu set this up is pretty clever. To start with, they (smartly) did not try to create their own cloud syncing service.

They use Dropbox, Google Drive, or OneDrive to do the actual heavy lifting. They just provide the interface through ScanSnap Organizer (Mac/PC) or ScanSnap Connect (iOS/Android) so you don’t have to mess around with folders in your operating system.

This means that if you are not someone who uses ScanSnap Organizer to store your documents, ScanSnap Sync is not going to do much for you. You’re probably better off use using the cloud services natively.

Doing it the way Fujitsu has done it has a few benefits from my perspective:

As I have mentioned, Fujitsu does not actually store your documents online for you. The storage and transmission is done by Dropbox, Google Drive, or OneDrive.

If you are not someone that is comfortable storing your documents in the cloud, you will not want to use ScanSnap Sync. However, if you want the benefits of having some or all of your documents accessible, you now have that option built in to ScanSnap Organizer.

Fortunately it doesn’t have to be an all-or-nothing proposition. You can keep your sensitive documents on your computer only and choose to store certain ones using ScanSnap Sync.

ScanSnap Sync is very easy to set up and use, but there are some things you should know before you get started:

First, you need to have the application for whatever cloud service you will be using set up on your computer or mobile device. Make sure you have the Dropbox, Google Drive, or OneDrive software installed and working before you set up ScanSnap Sync. It’ll make life easier.

Second, your documents will be stored in a folder called ScanSnap in your Dropbox, Google Drive, or OneDrive folder.

If that folder already exists, ScanSnap Sync will use it. Just something to be aware of.

Setting Up ScanSnap Sync On Your Computer

If you don’t see the ScanSnap Sync options, you probably need to update ScanSnap Organizer. Right click on the ScanSnap icon in your Taskbar or Dock, choose Help and then Online Update.

When you set it up, the main thing you need to do is select which cloud service you want to use: Dropbox, Google Drive, or OneDrive

Once you do that, you’ll see there is a new menu item in the Sidebar: ScanSnap Sync.

More how to use that below.

Setting Up ScanSnap Sync On Your Mobile Device

When you fire up the ScanSnap Connect app for iOS or Android, it will prompt you to set up ScanSnap Sync.

Hit Connect and choose which cloud service you want to use. Obviously, it should be the same service you use on your computer(s).

You can also decide whether you want to Auto Upload scans (vs. doing it manually) and if you have limited data, you can have it only sync when on WiFi. 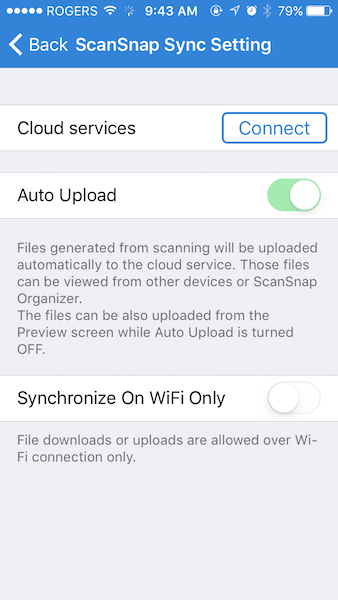 It will also prompt you if you want to upload all existing scans in your ScanSnap Connect app, or if you want to do them manually. Totally up to you.

Once you’re set up, using ScanSnap Sync is very easy.

Use ScanSnap Sync on Your Computer

In ScanSnap Organizer, drag the documents or folders you want to synchronize onto the ScanSnap Sync menu item. 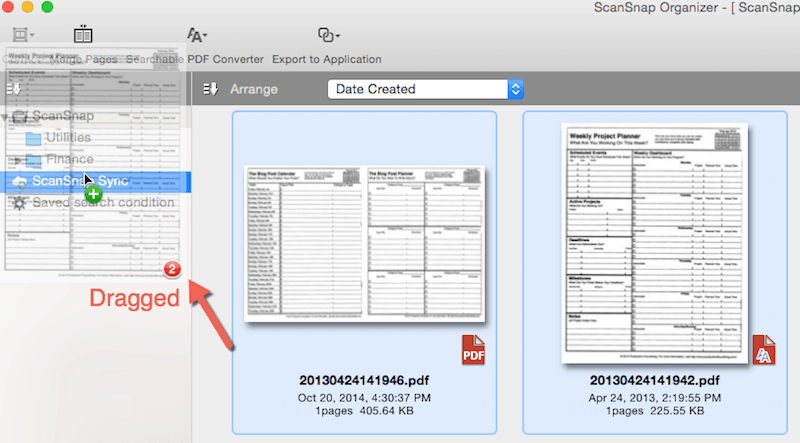 Once you do that, your Dropbox, Google Drive, or OneDrive application will chug away in the background and upload them. For example, here are some PDFs in ScanSnap Sync on the Mac:

You can see that in ScanSnap Organizer for Windows, the same files are there.

Here I added a new PDF to Windows ScanSnap Organizer: 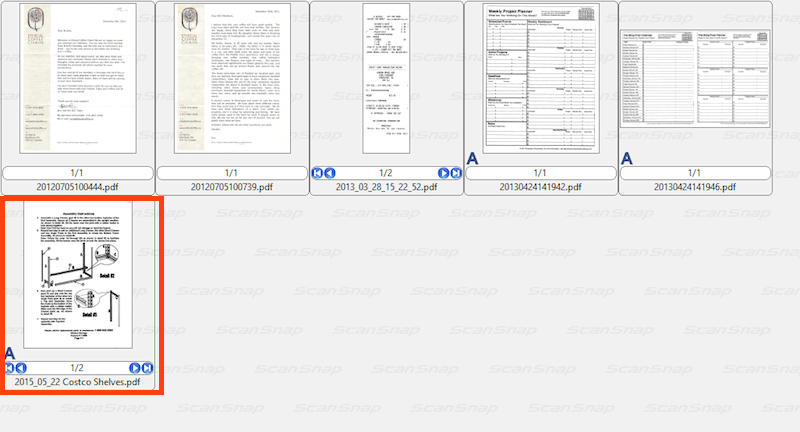 It almost immediately appeared in ScanSnap Organizer on the Mac. 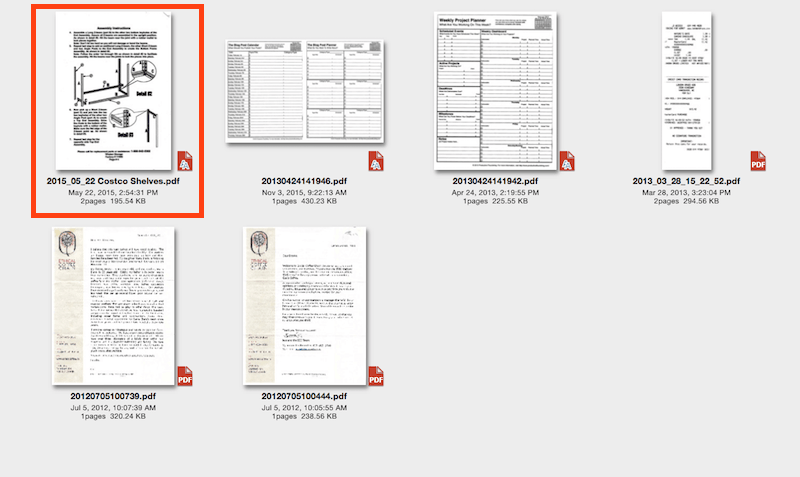 I was curious if you could have a folder structure in ScanSnap Sync and sure enough, you can drag folders in:

The folder appeared on Windows, but I had to restart ScanSnap Organizer for some reason.

Use ScanSnap Sync on Mobile Device

Once you’ve selected a Cloud service in ScanSnap Connect on your iOS or Android device, the files and folders you have saved in ScanSnap Sync on your computers should appear. 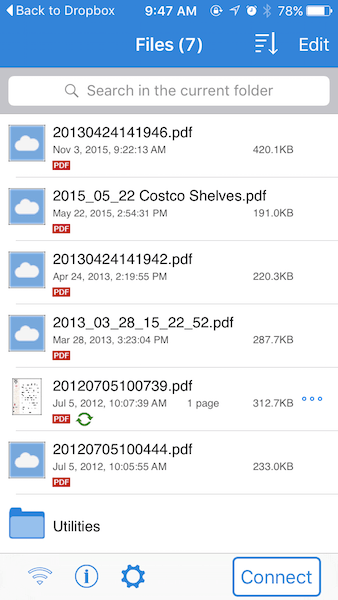 If you use ScanSnap Connect to scan wirelessly from an iX500 or iX100, your scans can be automatically uploaded to ScanSnap Sync.

For example, I used my iPhone to scan a document from my iX500. 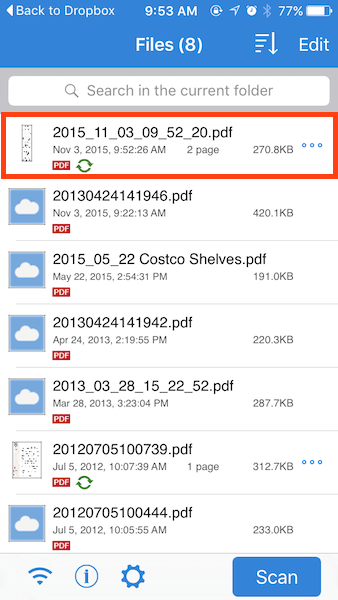 It then appeared in ScanSnap Organizer in the ScanSnap Sync section. 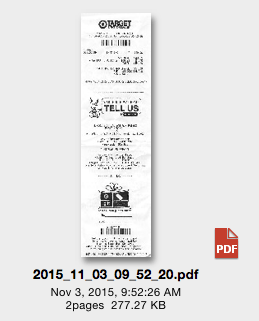 There is a side-benefit us this ScanSnap Sync setup for mobile. Historically, one of the downsides of scanning to a mobile device with ScanSnap Connect is that the documents are not searchable.

For example, that Target receipt that I scanned earlier was automatically made searchable. You can tell because of the “As” in the thumbnail. 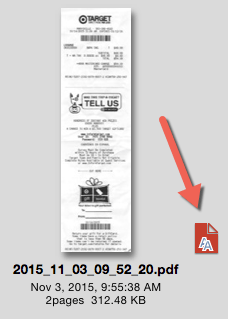 Who Should Use ScanSnap Sync?

If you are someone that uses the ScanSnap applications to organize your documents and want to be able to access them from different computers and mobile devices, ScanSnap Sync is a clever new feature to do that without locking you in to proprietary software or services. Best of all, it’s free.

If you’re a ScanSnap Organizer user, let us know in the comments how you use it.

If I store all my files in the ScanSnap Sync folder, will it still take up space on my computer? The organizer is working very slowly right now so I’m trying to copy everything to the Sync folder and delete what is in the regular folders.

I’m not understanding how this works; maybe you can help. If the default path for the scansnap organizer directory is \dropbox\scansnap, then any files I scan into that directory, from any device get automatically synchronized across all my devices according to how dropbox works.

So I don’t understand what the ScanSnap sync is really doing for me.

Your key phrase is “If your default path for ScanSnap Organizer directory is Dropbox…”. Most people wouldn’t know how to or even think it’s possible to move their SSO directory to Dropbox.

Also, it isn’t (easily) possible to make that change in the Mac ScanSnap Organizer as far as I know.

Thank you. After my post and after thinking and considering the matter (the purpose of the ScanSnap Sync functionality) it occurred to me that the answer was as you’ve described. It also clears up the confusion as to why from my Windows PC all my scans into Organizer are directed nicely to \dropbox\scansnap, whereas from my Mac I couldn’t see the same files, and vice-versa. Hours of frustration manually synchronizing directories and ending up with hundreds of duplicate files. Terribly frustrating result due to not ensuring I knew the program fully.

So then I’ll ask, please, now that the ScanSnap folder is located at \dropbox\scansnap, will those files continue to be automatically deleted? For me, the ScanSnap Organizer application is a better pdf file manager than PaperPort, which has bells and whistles which I just don’t need to organize my pdf files and get my work done.

I hate to complicate matters even more, but the information you found on “ScanSnap Folder” is actually a totally different bit of functionality than what we’re talking about. I wish they had named it something else.

Long story short, ScanSnap Folder is a feature of the Windows ScanSnap Manager that lets you initiate a scan from anywhere on Windows. I made a little video on the topic here: http://www.documentsnap.com/scansnap-folder/. It might be slightly out of date but it gets the idea across.

So, when you read about (capitalized) ScanSnap Folder, they’re not talking about the, uh, folder that ScanSnap Organizer stores its documents in. Those files won’t be deleted.

Wow. Yes the video does shed some light on how the program works. Very unfortunately the manufacturer chose to use the same description to refers to completely separate aspects of their software systems.

I’m going to work on this some more. From inside ScanSnap Manager, preferences, I have selected \dropbox\scansnap as the default saving location. I think what I’ve done to myself is setup the system to delete its temporary image files; those which I’m purposefully saving to dropbox\scansnap until I was ready to move them to other directories.

Good grief. Even the terms “Organizer” and “Manager” I think are not well thought out. Aren’t the words ‘organizer’ and ‘manager’ synonymous? ScanSnap Organizer should, I think, be retitled (at least for thinking purposes) as the “ScanSnap File Organizer and Manager” application, while ScanSnap Manager should be renamed “ScanSnap Utility.” “Manager” implies the application is more robust in its functionality; the program merely directs to where a scanned image is sent. It doesn’t actually ‘manage’ anything.

ScanSnap Sync needs encryption. People use ScanSnap to scan all kinds of sensitive documents & photos that need offsite backup. Can’t be that hard to add simple .7z or .zip password-protection to synced docs that is also used to unzip on mobile devices. Would make this a killer feature.

I think this is the first step in the right direction, but not quite enough.
I scan all my receipts into Scansnap Receipts on my home computer, is there anyway I can view those receipts on my smart phone when I am out and about? Or even on my laptop? Can Scansnap Sync help in this scenario?

I don’t use organizer, but this is cool when I scan using my android phone because now I can have it synced automatically to Dropbox or GoogleDrive which saves me some steps to manually upload to my Synology NAS.

I recently setup CloudSync on Synology to sync Dropbox and GoogleDrive. So, now I can grab the files from my NAS when I am at my home or otherwise, to rename and move the scanned files 🙂