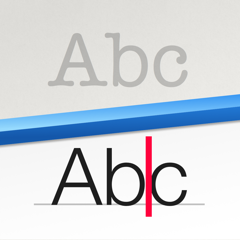 Recently I did an issue of the DocumentSnap Newsletter where I talked about scanning apps that perform OCR. In other words, an app that gives you the ability to take a picture of a document and make a searchable PDF right on your device.

Afterwards, awesome DocumentSnap reader Chip Shanley made the case for Prizmo, an iOS app that I didn’t include in my initial roundup. I wish I had.

I bought Prizmo and headed to my usual real-world scanner app testing lab, my local Starbucks. Compared to the other OCR apps out there, the results were impressive.

Prizmo works like most scanning apps. You use your iPhone or iPad’s camera to capture a page, and it supports single or multiple-page documents. 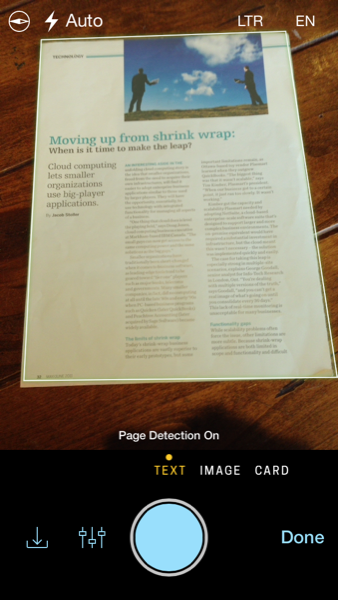 It will then allow you to adjust the scan, choose the language (there is OCR support for ten European languages), and even adjust the readability of the text (this can be important for the OCR). 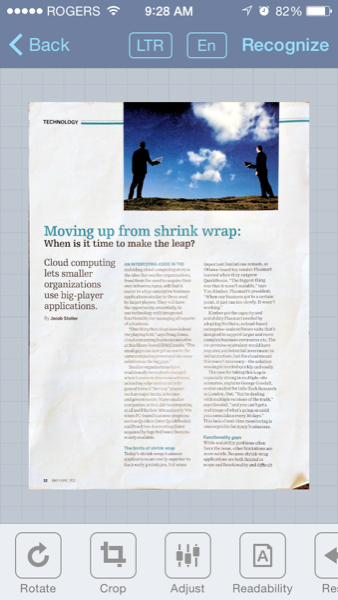 While Prizmo can be used as a normal scanning app, the main reason to invest in it is its near-desktop-class OCR. Once you’ve captured your scan, you can hit Recognize and it will show you the text in the document.

You can then move things around if you need to.

When you export, you can export either a PDF or text file with the text extracted out of the document or a searchable PDF with text embedded.

Here are a few sample scans.

Those scans are with no adjustments made. I am sure I could get even better OCR results if I fiddled with the settings. As it stands now, just the default is better than most other OCR apps.

If OCR wasn’t enough, Prizmo has a built-in translation engine and will translate text between European languages.

When no one was looking, I grabbed this Starbucks package off the shelf (in Canada everything has to be French and English). Here’s some text I captured.

Here is the translated version in Prizmo. 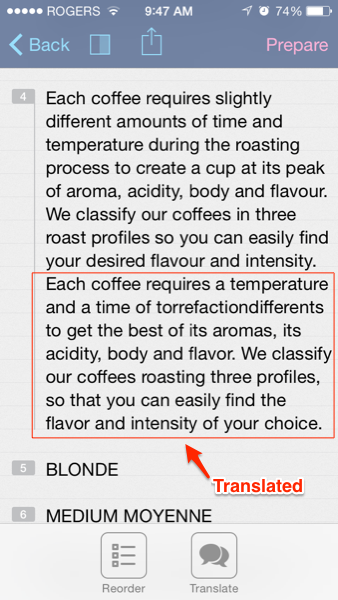 Not bad at all.

You can also have Prizmo read out the text, and there are different voices for each language. You have a lot of control over the voice and the speed that the text is read, and makes for a very cool feature. 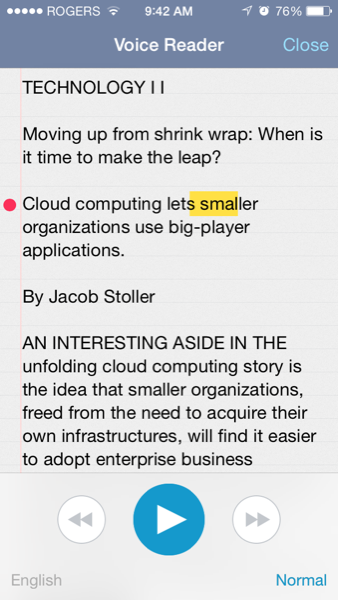 If all you are doing is capturing one-off scans, there are scanning apps out there that are cheaper or even free. However, if you are looking to create searchable PDFs and/or extract text out in multiple languages, it is hard to beat Prizmo’s accuracy.

Hi Brooks,
I was wondering if you could help me out please? I just purchased the app and I am sad to see there are no instructions on how to export the file to iCloud once it has been prepared. I also can’t tell which version I purchased. Could you give me a hand please? Thank you kindly!

Curious as I thought I had tested every scanning superstar…..My current fave is Scanbot since they have nailed the workflow….I mean, you can point the thing….it takes the picture, does OCR and uploads to my dropbox “action folder” watched by Hazel naturally….Other than opening the window all I had to do is select one tap or one tap plus one tap for any additional page. Wonder how these two would compare?

Has this replaced Scanbot as one of your favourites?

I tried to scan a colored business card placed on a white background. The page detection rectangle keeps moving around and will not lock on to the card. I found it impossible to take a picture of the card so I could OCR it. I am using a iPhone 6 with the latest IOS version, 8.1.3. Not sure what I am doing wrong, but this app is not working for me. Do you have any suggestion? The app, if I can get it to work right, sound like it is just what I am looking for to scan in the field.

Yeah, I found the page detection annoying and jumpy (totally forgot to mention it in the post – I turned it off right away).

What I did was turn it off by clicking on the little “levers” icon at the bottom left and taking the picture. Then later you can hit Crop and it does a good job auto-detecting the edges without the jumping.

That’s what I do, anyways.

I have PDF pen scan+. Is Prizmo’s OCR even better than that?

From what I have found, yes. (PDFpen Scan+ is good too though!)