OneNote For Mac - Promising But Early

OneNote For Mac – Promising But Early

Over the years I have talked to many, many fans of Microsoft OneNote. They tend to fall into one of two camps: Microsoft Windows users who love OneNote and you would have to pry it out of their cold dead fingers, and people who have switched to the Mac and miss the software dearly.

The latter camp now has a glimmer of hope, because as of yesterday Microsoft OneNote has been released for the Mac. You can download it from the Mac App Store here.

Most remarkably, OneNote is now free, both for Mac and Windows. 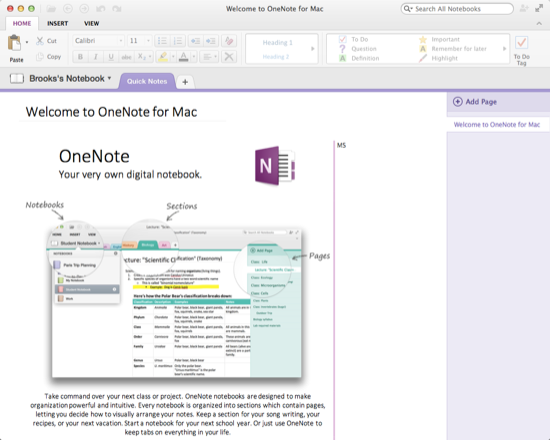 I say “glimmer of hope” above because while OneNote for Mac is a very nice application, I suspect that many DocumentSnap users will want to wait a while before taking the plunge.

OneNote for Windows users have long pointed and laughed at the limited formatting and organizational abilities of apps like Evernote.

Organizationally, OneNote allows you to create sections and pages, and you can reorder them however you’d like. You can color code these to make it easier to see.

You can use Microsoft’s OneDrive service (formerly known as SkyDrive) to share and sync your notebook and collaborate with others.

Your notes are synced amongst your devices via OneDrive too. For example, I created a note using the iOS OneDrive app and added a picture. It appeared in the Mac app almost instantaneously. 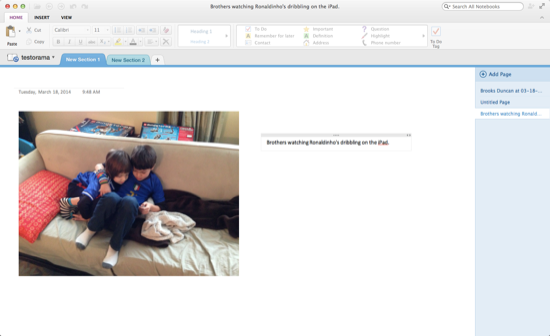 I then added some text and it synced back to the iOS app. 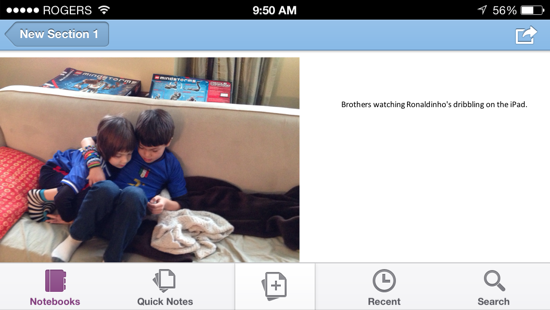 Microsoft has turned OneNote into more of a platform and opened up an API. What this means is that different apps can now integrate with OneNote.

For example, yesterday I saw that the Doxie scanners now have OneNote integration, as does Genius Scan, one of my favorite mobile scanning apps.

There is even an IFTTT channel for OneNote.

Now, The Not So Good

On Twitter yesterday, I was very excited about the launch of OneNote for Mac.

My excitement was tempered somewhat once I started actually using it. There are a few things you should know before diving into OneNote For Mac.

When I first started up the application, it made me sign in or create a Microsoft account. There was no option to skip this step, which I thought was strange.

Now I see why – OneNote for Mac will only open and save notebooks to Microsoft’s OneDrive service. You can’t create notebooks that only live on your computer, and you can’t open and save them to a corporate server or Sharepoint.

Anything you create will be saved to Microsoft’s servers, which you may or may not be comfortable with.

Another limitation is that it doesn’t appear that you can attach files to OneNote notes. You can only add images. This means you can’t save PDFs to a note, which severely limits its usefulness for going paperless.

As far as I can tell, you can’t even attach Office files which is a little surprising.

You also cannot create a password-protected section, which I believe you can in OneNote for Windows.

From a going paperless perspective, these are pretty significant omissions, but I suppose you can give Microsoft credit for launching early, getting feedback, and (hopefully) iterating instead of creating a huge bloated product with features no one uses.

OneNote for Mac looks very promising, but it may be a little early days. It is a product to keep an eye on.

What say you OneNote fans? Are you going to be jumping back in?

Heres the situation. There are plenty of enterprises running environments with both PCs and macs connected to the network. Please get the onenote for mac version up to speed, and fast. It needs to be able to connect to enterprise hosted sharepoint to be of use for enterprises, just like with the PC version of onenote. Why cripple one of the actually useful products?

I know MS is obsessed with the cloud, but alot of corporations actually dont want that and keep it in house, please MS support these corporations and get a new version of onenote for mac out fast.

Brooks, I have a 2000 or so version of a Toshiba XP laptop with a 360 rotation and able to flatten to the laptop………..It was called Microsoft Tablet XP………It had One note included———–Fantastic program—–you could hand write—-voice input—save to laptop———send in Outlook—–the older tablet laptops never went over very big…….when you walked into a meeting with one, everyone wondered who you thought you were———how things have changed———I started a download on one-write to my present windows 7, and stopped the download and removed it from my system——-the program is loaded into the CLOUD——Not on your computer——————I would guess it is to co-inside with renting OFFICE in the Cloud!
how things have changed———–I have recently installed my WD Personal 3Tb CLOUD and am not quite ready to begin renting my software.

How Microsoft can mess up a great product like the original “One-Write-Plus” XP software, I really do not think they even realized they had it, until I wrote to the manager of “CompuServe” News, about 3months ago.