How To Encrypt Evernote

How To Encrypt Evernote

Is your data secure in Evernote?

There is one notable exception: they don’t talk about encrypting the files you save in Evernote. This is because, at present time, data is stored in Evernote unencrypted.

Hopefully that will change someday, but at the time of writing you need to take matters into your own hands.

Encrypting Text Inside A Note

The “official” way to do encryption in Evernote is to simply encrypt any sensitive text in a note. This is easily done in the Evernote UI:

Step 1: Select the text you want to Encrypt. 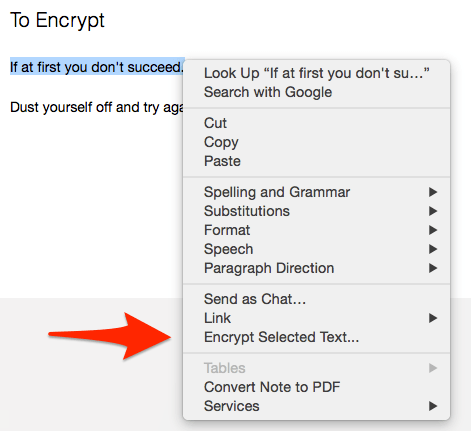 Step 3: Make up a passphrase that you will later use to decrypt this text. Note: This phrase is never sent to Evernote’s servers, and they have no way of retrieving it for you. If you forget it, you are out of luck. 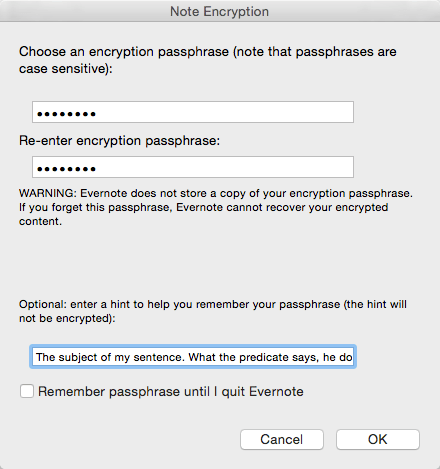 Step 4: Your text will now show as encrypted in Evernote. To decrypt it, click it and enter your passphrase from Step 3.

Encrypt Documents Before Uploading Them To Evernote

As mentioned, Evernote doesn’t give you a way to encrypt your files. If you’re using Evernote for going paperless, this means that if you want your PDFs encrypted, you need to do it before uploading.

There are free tools on Mac and Windows to do this. On the Mac, you can use the included Preview application. On Windows, you can use PDF X-Change Viewer to do the job.

I describe how to do this in detail in my Paperless Security Guide.

One thing to note about this: if your PDFs are encrypted, this means that Evernote can not index them and therefore it cannot search the contents. It’s up to you whether you wish to trade off searchability for security.

In previous versions of this post, I described how to encrypt your local Evernote database on Mac (using a symlink to an encrypted sparse bundle) and Windows (using TrueCrypt). I personally do not do this anymore, as Evernote keeps changing how they store things.

There is an interesting-looking project called SafeRoom. It allows you to encrypt/decrypt notes in Evernote notebooks, including those with PDF attachments. There are even mobile apps.

Here is a thread on the Evernote forum about SafeRoom if you want to follow along with the project.

Do you have any other methods you use to encrypt Evernote? Let us know in the comments.

When I want to open Evernote on my phone I have to put in my passcode. Can I arrange my mac lap top the same way so no one can open my evernote files without a passcode?

I don’t believe there is a way to set a passcode on the Mac (I’m travelling so I can’t check). I know it’s been requested for a very long time!

Saferoom will do a better job Actually encrypts notes, pdfs etc, but leaves title and tags un encrypted so you can search them. The mac download is free! They also have an ios app.

From this process, is your data just encrypted on your own machine but still not in the Evernote cloud right? The only option for encrypting on Evernote servers themselves would be to use their own encryption inside the note, correct?

That’s right. You don’t have much control over what Evernote does on their end, other than encrypting the text in a note, or encrypting a PDF locally before adding it to a note.

Ok thanks Brook for the info.

It is a sandbox protection thing at the OS level. You have to go one level deeper and then it will work in the AppStore version of Evernote:
ln -s /Volumes/DiskImage/EN/Data /Users/ZZZ/Library/Containers/com.evernote.Evernote/Data

Try MacFort. It's a much easier (and more efficient) method for accomplishing the same thing.
http://www.madowsoft.com/how-to-encrypt-evernote-…

I followed each of the steps above. Simple enough. I've created sym-links before. So, nothing technically new. However, THIS SEEMS TO NO LONGER WORK with the current version of Evernote (5.x).

NOTE: Evernote did update where it stores the database file. It's now stored here:

I made these changes in steps 11-16 above and still no luck.

Am I doing something wrong? Gonna do some Googling around.

you have to correct the Container.plist as well. Near the bottom of the file you'll find <Key> and <String> values that will be incorrect after moving the application.

For others coming to this post after Installing Evernote 3.3.0

Wanted to make you aware that the most recent update to the Mac Evernote application (version 3.3.0) has changed the location of the EN database mentioned above.

Instead of the using the folder ~/Library/Application Support/Evernote, it is now located at ~/Library/CoreData/com.evernote.Evernote.

The steps remain the same except to use this new com.evernote.Evernote location instead.

That saved me a lot of hunting!

Anyone tried Datalocker from Appsense yet? Looks easy

I tried mounting the folder at different times. Actually, the first time I did all of this, I forgot to mount it. I started over.. then started over again, first mounting before I made the Symbolic link and then afterwards. WHen exactly should I mount my new drive?

Forgot to mention, there's never, ever any little arrow that indicates it's an alias or whatever.

Hm, if there's no arrow it makes me think that there is something wrong with the Symbolic Link. This is possibly a dumb question, but when you made the symbolic link and when you are trying to access the folder, is the sparsebundle mounted (in other words, did you double click it and enter your password so that you have an, in this example, EVERNOTE drive showing in the Finder).

Know what? I got it to work. I can't say exactly what I did, but I do know I apparently created a good Symbolic Link yesterday, but it was placed in the wrong spot. So, I did everything over again today, then happened to see it, says it was created yesterday… I moved it into Application Support, and now it works.
Of course, someone could still open Evernote on my computer and see everything that downloads from the servers, just not the local notes. I guess I just should put everything sensitive in local notes huh?

Never mind, Evernote won't even open if I don't have the disk mounted. It just says "file name invalid" and quits. Awesome! Sorry I comment so much. I tend to think by typing.

Not a problem, I do the same!

Basically, I got it to say "file exists" by typing in different combinations of stuff, and I even got it to put Evernote in Application Support again. By this point, Evernote has synced with its online servers and forgotten I have local notes. I then need to delete all the evernote files, then put them back in, then restart evernote. I've created two different sparsebundles, I'm thinking of starting over entirely, but what is it about the terminal commands that aren't working for me? I typed in everything, then pressed enter. Even the spaces, the / and , the capital letters.. I did it so many times I'm positive it's correct. I am only very basically Unix Literate though, so the chance that I'm missing something is good.

@Yogi. How did you fix your problem? I am having the same thing happen. In terminal, it says "no such file or directory". Everything is in my evernote sparsebundle, deleted from application support…

I’ve done an entire disk encryption with my Mac Mini… so, not only is the Evernote DB encrypted, but everything else is, as well.

This, too, is an option.

Even though it's synced w/ the cloud, I'd suggest backing up the Evernote database before the procedure.

Great, glad to hear Yogi. Let me know if there was something I could make more clear.

Ok, now I am getting a file that says Evernote with an arrow, but not a folder

Hi, I'm getting an error when I type in the location in Terminal. It says no such file or directory. Where am I breaking down?

Awesome! many thanks for the tip on moving the database and creating the symbolic link.
I've successfully moved my database an external drive (i.e. my external drive, not the company-supplied Macbook).
🙂 🙂

Thanks. It really works fine. I am a switcher coming from Windows XP and I am really pleased with the enormous potential of MacOSX.

Great Carlos and congratulations on making the switch! 🙂

All goes fine (I can see all my Evernote database files by following the alias) until I Iaunch Evernote, then it hangs and the beachball just keeps spinning so I have to switch off the machine and restart.

Hi Chris, that's really strange. I wonder if a newer version of Evernote breaks these instructions (not sure why it would). When I get a chance I'll re-try it and see if it works for me.

Don’t forget to also sym-link your cache files in /Users//Library/Caches/Metadata/com.evernote.Evernote or you could be leaving latent sensitive data unencrypted on your local drive.

@jammer(six) I keep a local notebook on my main workstation with the sensitive / critical data I cant have sync’ed to the cloud. When I take a note of similar nature on my mobile devices or from the web I move that note when I get back to my workstation so it doesnt remain on Evernote’s remote servers.

Too bad your docs aren't encrypted on the Evernote servers… Yes, you can encrypt the text in notes, but not things like pdfs. Thus, if someone on their end wanted to take a peak, they could. 🙁

Espionage do the same but automatically if you open EN. But good starting point for writing a AppleScript 1. Open the sparsebundle 2. Open Evernote

Good articles, thanks for the useful info…2 questions:

Why not just use truecrypt for mac as you did for windows yesterday? Or was this to point out the built in option in mac?