Evernote 4.0 For Windows Cleans Things Up

Evernote 4.0 For Windows Cleans Things Up

I am always in awe of is the number of different platforms that Evernote supports. Having worked in software in the past, I can only imagine the product management headache that must cause.

Because of all their platforms, sometimes different versions start getting a bit long in the tooth and that was definitely the case for Evernote’s Windows client. Version 3.5 was good, but it definitely had some catching up to do.

The first benefit that 4.0 brings is speed. According to the company, the new version is a complete rewrite from the ground up. They say it starts five times faster and uses half the memory. I am not going to sit here with a stopwatch to test that claim, but it definitely feels much snappier to me.

While they were rewriting things anyways, they took the opportunity to clean up the UI.

They made things prettier and (in my opinion anyways) more functional. For example, they made it so that you can choose which type of note that you want to create right off the bat.

They also have made things cleaner by hiding the functons that you don’t need to see until you actually need to use them. For example, the search description is hidden until you click on it.

If you’re on Windows 7 (which I finally am), you can use some of the new features such as geolocation and you can use Windows 7’s Jump Lists.

What is a Jump List? Yeah, I didn’t know either (what can I say, I’m usually a Mac guy).

When you click on the Evernote icon down in the task list, you can now do a bunch of Evernote functions right from there. Pretty cool. 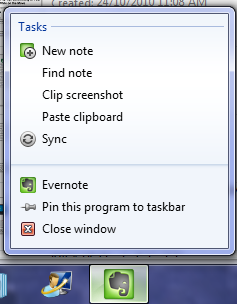 One thing that I find a bit weird is that you can’t search inside a note when you are viewing a note. Obviously when you do a general Evernote search, it will find and highlight the words. However, if you have a note open I can’t see a way to then search inside it. Hopefully they will add that soon.

There are a bunch of other improvements that you can read about in their blog post like improved clipping and editing.

If you’re a Windows Evernote user and are not sure whether to upgrade or not, I say go for it. If you tried Evernote in the past and didn’t like the UI or found it slow, it might be worth checking out again.

How Does The Evernote CEO Organize His Notes? | Tips To Learn How To Go Paperless | DocumentSnap Paperless Blog - August 23, 2012 Reply

[…] the way, I feel the need to point out the time that Phil commented on DocumentSnap about someone’s security concerns. How cool is that?! I met him extremely briefly at last year’s Evernote Trunk Conference, and […]

Wow did not expect a response from Phil. Excellent! Will be using Evernote for all my storage then.

Do you recommend uploading scanned documents (receipts, invoices, bank statements etc) to Evernote for storage and lookup? I ask as their terms of use are alarmingly loose. They seem to claim ownership to everything you upoad and indicate they can post anything publicly.

Evernote is fundamentally designed to be a service for your private information.

Anything you upload to Evernote stays yours (assuming it was yours to begin with) and private (unless you explicitly choose to publish it). We don't own any of your content and we don't share your data with anyone without your explicit permission. We don't look at your data (again, unless you ask us to), we don't do data-mining, we don't use your data to target ads, drive affiliate traffic, make referrals, etc.

You do give us permission to use your data for the purposes of running our services (for example, syncing it to your other computers, backing it up on our servers, etc), and this may entail your data being transmitted to other service providers under contract to us (like the network operator, data center, etc.). We try to make this clear in the user agreements.

Hope this helps clear things up,

I can't say it any better than the CEO of Evernote, so there you go!