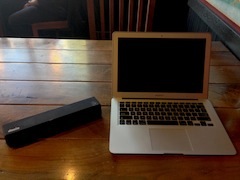 When I opened the Doxie One review unit box, my first thought was “I’m going to destroy my kids in DoxieBall”, but my second thought was “wow, this looks a lot like the Doxie Go”.

Shipping in black instead of the Go’s white, the Doxie One has a similar mission: to scan documents without needing to be plugged into a computer.

I know that I should be focusing specifically on the Doxie One instead of comparing it to the Go, but come on, it’s not my fault:

However, once you look more closely, you can see what the Doxie folks are going for here. They’ve taken the form factor and workflow of the Doxie Go, but refined and simplified it.

For example, on the back of the scanner, there is only an SD card slot. The USB port and the onboard memory is gone in the Doxie One. If you want to scan, you scan to an SD card. A 2 Gig card is included in the box, but you could of course use your own.

To transfer your scans to your computer or other device, you just pop the SD card out, or if you don’t have an SD slot on your computer, a USB cable is included and you can transfer the documents over that way.

Another simplification is with scan quality. There is one mode: 300dpi. I’d imagine that is fine for most users that would be purchasing the Doxie One, but if you need higher quality, you’ll want to go with the Go or another scanner. Personally, I always scan at 300dpi anyways.

The Doxie One has two firsts for Doxie scanners: it comes with an AC adapter so you can plug it into the wall, or it has a battery slot on the bottom so that it can run off of 4 AAA batteries.

I personally like this change a lot. In my Doxie Go review, I mentioned that initial letdown where you unpack the scanner and then have to wait a few hours for it to charge. With the Go, a few times I have gone to use the scanner to scan something only to find that it was out of charge. Not a big deal, but slightly annoying.

The Doxie One has neither of these worries. As long as I have batteries or a wall plug, I am good to go.

One thing about the batteries: the instructions say that alkaline AAA batteries are not supported, and Ni-MH rechargables should be used instead.

You definitely want to stick with rechargables. Apparently the scanner can lock up if you use alkalines (weird I know, but just follow their instructions).

As mentioned earlier, the scanner comes in a cool shiny black color, but they sell nice looking skins for $10 if you want to change that.

I’m not going to lie: I love that red skin. Tempting tempting.

I have to admit, I’ve always been a big fan of Doxie’s software. It is not a “power user” application, but it is not meant to be. It is meant to be fun and easy to use for normal people, and I think it delivers.

Instead of giving a big run-through of the software, just check out the Software section of the Doxie Go review as it is the same other than the OCR stuff, which I covered in this Doxie OCR post.

TL;DR version: when you plug insert the Doxie’s SD card, the Doxie application will import your scans. You can then rotate and adjust them if you need to, you can “staple” (combine) pages, and you can export them to cloud services or as OCR’ed PDFs to your computer. It is all easy and works well.

As I said, the Doxie One scans at 300dpi, and it does a pretty good job of cleaning up the images after you scan them. You can also adjust the image in the Doxie software.

Like all other Doxie scanners, the Doxie One saves its scans as JPG images as if it was a camera. The Doxie software on your computer then converts them to PDF. It would be nice if the scanner could somehow kick out PDFs natively, but that’s not how they chose to do it.

Here are some examples of some documents that I scanned at Starbucks while ignoring the “why is that dude scanning in Starbucks?” looks.

One benefit of the Doxie One scanning to JPG like a camera is that camera accessories like the iPad Camera Connection Kit can read your scans without any configuration. 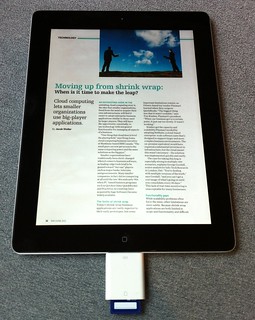 You can then send the images to other devices and apps on the iPad, or can e-mail or iMessage them to someone. They will, of course, be JPGs. If you want to see more about this workflow, or if you want to be able to change the documents into PDFs, see this Doxie iPad workflow post.

The Doxie One is available on Apparent’s site, or on Amazon. At the time of writing it is $5 cheaper on Amazon, so there you go.

I like the scanner and because of the battery and AC adaptor, I think it will become my new “kitchen scanner”.