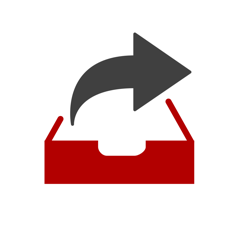 There is nothing inherently wrong with the email app built into iOS, but for quickly processing message there are a number of third-party email clients that make it faster and easier.

I had tried most of them, but Mike Vardy tried to talk me into switching to Dispatch. I refused, not because it didn’t look good, but because by that point I had email app fatigue.

He kept it up for months, and finally I caved. Frankly, I am angry that he didn’t try harder. What a great email app.

For me, Dispatch’s strengths come in three main areas:

In this post I am only going to talk about the second of those because they just released a new update that makes Dispatch even better for going paperless.

When you are viewing an email, there is a button at the bottom of the screen called the Triage button (at least, that’s what I call it).

When you tap it, it opens up a pane that lets you send the email or information selected in the email to another app. 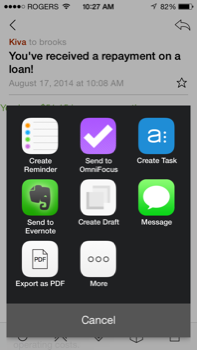 That is my screen, but you can add many more apps. There is a list on the Dispatch site.

I find it really helpful to quickly send an email into my task manager (OmniFocus in my case) or to Evernote if I want to save it there.

Dispatch 2.1 added a new feature that takes the app from awesome to nearly perfect – the ability to export an email to PDF. This is massive for dealing with emailed receipts and similar messages that start as an email but you want to end up as a document.

In the past, I would always leave these messages in my inbox to deal with later on my computer[1]. Now I can be done with them from wherever I am.

In the triage menu that you see in the screenshot above there is now an Export as PDF button.

When you tap that, it displays your email as (surprise!) a PDF. 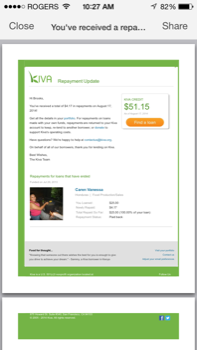 From there, you can hit the Share button and send the newly created and searchable PDF to wherever you’d like. For me, that is usually Dropbox. 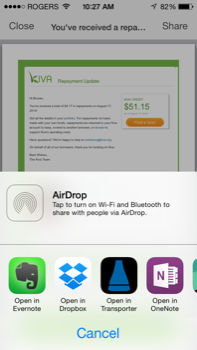 I absolutely love this new feature of Dispatch. The app is $4.99 on iTunes.

If you have another great email-to-PDF workflow on iOS, or if you have something else awesome you do with Dispatch, let us know in the comments.

Brooks, I find the app “Mobifolders” very good and helpful. You can from there import any of your emails and attachments and then make them PDFs if you want

Thanks Danny, hadn’t heard of that one!

If Vardy recommended, does that mean you can send stuff to Todoist?