Behind These Paperless Evernote Hazel Eyes

Behind These Paperless Evernote Hazel Eyes

Using the Kelly Clarkson quote was just way too easy, I know.  This post is not in fact about American Idol winners, but is about Hazel, a Mac-only rules-based file management application.  It does a ton of stuff, but today I am going to talk about how you can use it in a paperless workflow.

To be honest, DocumentSnap readers have been mentioning Hazel to me for quite some time, but for whatever reason I have never gotten around to looking at it until now.  As usual, you guys are way smarter than I am.  Why on earth did I wait?

Basically, you can think of Hazel as something that brings iTunes Smart Playlist-like rules to the files on your Mac.

How can this help in a paperless workflow?  Well, for example, you could have Hazel watch a folder, and then anything that you drop into it could be tagged, Spotlight comments added, OCR’ed, and then sent to a specific folder.

David Sparks from MacSparky has a great runthrough on how he does this.  I definitely recommend checking it out.  He has a bunch of Hazel rules that get triggered when he names a file something, like “gas bill”.  As soon as he names a file “gas bill.pdf”, the Hazel rules kick in and it gets renamed with the appropriate date added, then it gets sent to a nested folder structure based on type and date.  Very cool stuff.

He also describes this workflow in episodes #3 and #25 of the Mac Power Users Podcast.

As I said, there are a bunch of different ways you can use for Hazel in a paperless workflow.  One that pops to mind is to create a rule that sends something to Evernote.  Lets say we scan or receive PDFs and want to send certain ones to Evernote.

In my example, I’ll create a folder under Documents called “ToEvernote”.

Then I will create a Hazel Rule called “Evernote Import” that watches that folder, and acts on any PDFs that I save there.

First I will create a condition that acts on any files with Extension PDF:

Then I will run an Applescript, so will choose “Run Applescript”.  I will leave as “embedded script” and then hit “Edit Script” 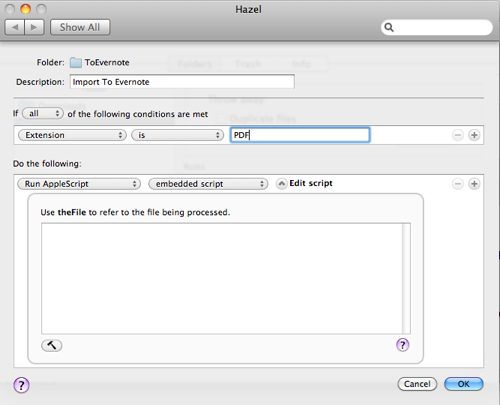 Then I will paste in the following code to that box:

Then I will hit the Plus sign to add a new action.  Once a file has been added to Evernote, I don’t want to keep it around, so I trash it.  I choose Move File and then select the Trash folder. 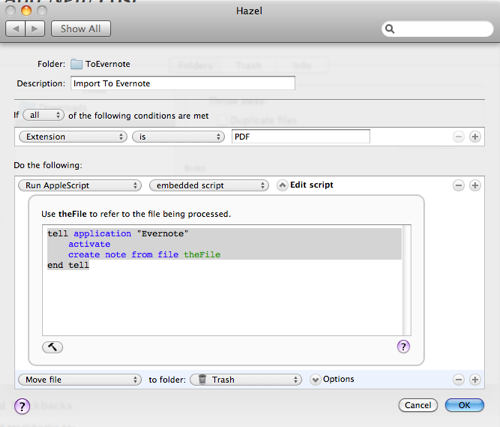 Now, as soon as I drag a PDF into that toEvernote folder, Evernote pops up with the new note and the PDF is trashed. Coolio!

Of course, you can get extremely fancy here, but between this post and David Sparks’, you should be well on your way to paperless fun with Hazel.

I’m rocking the 14 day free trial now, but I think I will be paying the $22 to buy the full version.  Great stuff.

Do you use Hazel? Have any tricks? Leave a note in the comments.

Hi,
In regard to send the scanned file to a specific notebook, I have the following question:

Currently the script line is:
create note from file this_item –> This script is working fantastic! Thanks for that

Now, you said to change this line to:
create note from file theFile notebook “Inbox” ==> Instead of this, shouldn’t be:

Is it possible to import the “Tags” of the file as well? Automatically.

Hi Brooks, this is fabulous. Is there anyway to do this with any applications other than Evernote – such as Onenote?

Great post. Quick question: is there a way to put multiple files into the folder but have them added to the same note, rather than a new note for each file?

Hmm. Good question Bob. I’ll have to think about that one. In the meantime, what I usually do in these situations is let things go in Evernote indivually and then highlight the notes and click Merge. That’s a fast and easy way to put everything in one note, albeit not 100% automated.

[…] easiest way on the Mac is to import to Evernote using Hazel, but if you don’t use Hazel you can do it using built-in technologies such as Automator and […]

I am having some problems getting this to work with the new EN, Version 5.4.1. Has the AppleScript changed with the update?

The error message says: RULE ERROR: At least one of the actions has an empty field or an error. Please fill in the field, correct the error or remove the action.

Hm I just tried it with 5.4.1 and mine works. Could you post your script from Hazel?

Just tried this and had the same problem as dacarsi…but on the bottom of the window, next to the "hammer" icon, this message:
"Expected end of line, etc. but found application constant or consideration."

Same problem here with the word "note" in the applescript.

Hi! I had the same problem when doing this Folder Actions post. http://www.documentsnap.com/evernote-mac-import-f…

I found that I had to change the 'tell application "Evernote"' line to:

Once I changed that, it worked. Can you try?

How to Scan Directly into Evernote using NeatDesk | Tips To Learn How To Go Paperless | DocumentSnap Paperless Blog - July 9, 2013 Reply

[…] Thanks Amy! Unfortunately the Mac version of Evernote doesn’t have Import Folders for some weird reason, but something similar can be done with Hazel. […]

Hazel works great with evernote but has anyone got hazel to automatically attach evernote "taggs" to OCR'd document??

I think if you want to assign tags to the Evernote note from Hazel, you'd need to modify the AppleScript portion. Here's the Evernote applescript page with examples: http://dev.evernote.com/documentation/local/chapt…

Is there any way to tell the apple script which notebook to put it in?

Great timing. I had actually just made a script that does this a few days ago.

Replace the "create note" line with this:

Where Inbox should be, of course, replaced with the exact name of the notebook that you want it to be saved to. Let me know how it goes.

I have that issue too

Hi, what is not working about it? Could you post a screenshot or something about what is happening?

Anyone having trouble with this embedded script? Can't seem to get it to work