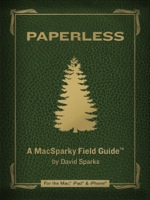 He’s a lawyer, sure, but he also runs an incredibly useful website called MacSparky, and I am not just saying that because my iPhone’s home screen is Internet-famous there.

David is also one half of the dynamic duo that produces a podcast called Mac Power Users, and a recurring topic there is going paperless.

A while ago, I heard on the Twitter grapevine that he was working on a book about going paperless, and I was intrigued. Would it be a physical book like his last one, iPad At Work? Would it be an eBook in PDF format?

It turns out[1] that it was none of the above. David has created a multimedia guide that includes images, movies, and interactive elements. It is pretty crazy.

A few things to note before I go more into it:

If after that you want to ignore the rest of this post and buy it, head on over to the iBooks store.

Oh, a minor disclaimer: David was kind enough to link to DocumentSnap in the Appendix. I had no idea he was going to do that, and my review would be the same either way.

Paperless starts with a discussion of why you might want to go paperless, and then jumps right in with a brief overview of a paperless workflow.

It then covers the following high-level topics:

He then goes through his own personal workflow, which is helpful.

Even if you have never read MacSparky or listened to Mac Power Users, it will be very clear from reading this that David really knows his stuff. He has spent a lot of time thinking about his tools and workflow, and has tried to make it as efficient as possible.

One thing I like about the guide is that it is strongly infused with his opinion. If he thinks something should be done a certain way, or if he thinks doing something is a waste of time, he will say so.

There are some cases where I personally do things differently, but that is what is great about this stuff: there is no one right way to do it, and we all need to do what works for us.

This is my first experience with an eBook created with the new iBooks Author that Apple released back in January, and I have to say: this is the future.

There are videos and interactive images embedded right in the book, so if you are reading about something and want to see how it works, you can just tap on the page and it will play the video for you right then and there. If you have an AppleTV, you can even stream the video using AirPlay and watch it on your TV. This is the sort of thing that books on a tablet[2] make possible.

Of course, as I mentioned earlier, this means that the downloads are quite large, and it means that you can only read it on your iPad. I know that some people may want to read it another way[3].

Should You Buy It?

If you use a Mac, have an iPad, and want a great guide to going paperless, I think David has hit it out of the park with Paperless. At only $5, it is definitely worth the money. I am really looking forward to seeing what other Field Guides he has cooking.

[…] Users, but he also has a series of Field Guides that he publishes. I’ve written about his Paperless Guide and Email Guide […]

I just have to second you reccomendation. This was a terrific book, practical and inspiring. I really enjoyed reading it and learned a lot.

I've been telling people that the CMD-P-CMD-P that lands you right at the Print-to-PDF screen is worth the price of the book alone. But there is so much good stuff in there!

This is the future of publishing…