I’ve written about Genius Scan before, both in my initial Genius Scan review and in my iPhone document scanning app comparison post. Since Version 2.2 has some nice visual improvements, I thought I’d take a quick look.

For the record, since I brought it up in the comparison post, I am also writing this at Starbucks. This time instead of an elderly couple arguing, there is some guy complaining loudly about the Parks Board and the new Subway opening around the corner.

First and for some people very importantly, Genius Scan has a new icon which is much, much nicer than the old one:

Another new feature is the ability to search your documents inside Genius Scan. Personally I don’t use the app for document storage in any real sense. I use it to scan a document and upload it somewhere, so this feature doesn’t do much for me, but I can see how it might be useful for some people.

Genius Scan now adds the ability to tag your documents. 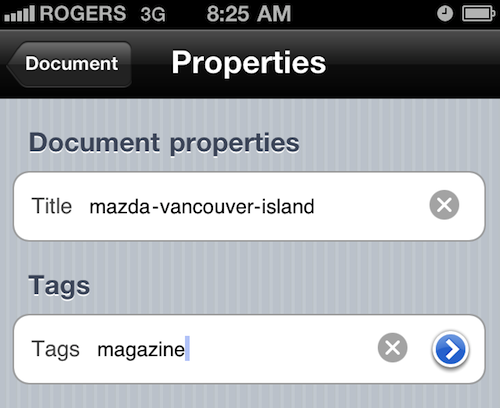 As I said, I don’t use the app for document storage, so initially I didn’t think this feature would be for me. However, they did something great and made it so that the tags you apply carry over to an Evernote export when you are using Genius Scan+. I use this feature all the time now. 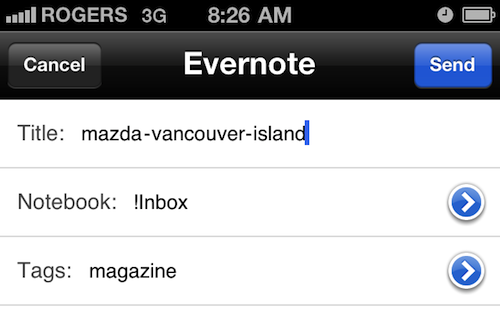 My favorite part of the new Genius Scan is the nice new user interface for exporting. Here is a screenshot of the new one: 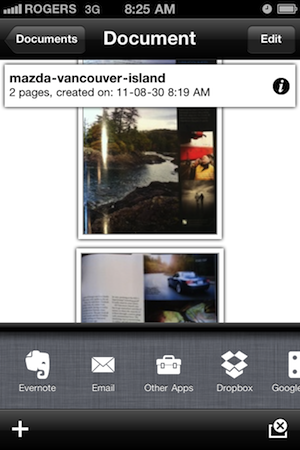 Here’s the old one from my review last year: 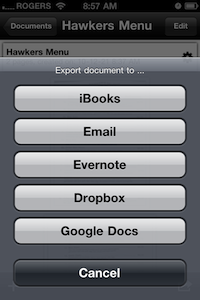 As you can see, much nicer. A nice touch is if you have Genius Scan+, the export options order themselves in recently-used order. Now that is nice design.

I don’t believe the scanning itself has changed too much in this release. If I was smart, I would have kept the paper from my iOS scanning app comparison post and re-scanned it this time, but I have never claimed to be smart.

Here is a scan with Genius Scan 2.2 from Mazda magazine about my former home on Vancouver Island. They called the town I grew up in a “busy, ugly lumber and fishing town”. Not cool Mazda magazine, Port Alberni is not busy.

(By the way, the light streaks are not Genius Scan’s fault. The lights in this Starbucks are crazy bright and the paper is very glossy).

Genius Scan is free on the App Store, and with it you can export your documents via Email or Wi-Fi. To export to other services such as Evernote, Dropbox, or many more, get Genius Scan+ which at time of writing is $2.99.