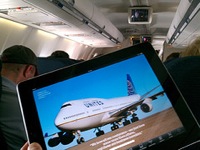 In Tim Cook’s Apple Event in October, he gave the usual roundup of Apple achievements. One interesting quote was this one:

In the cockpit, pilots are using it. They are replacing 40 pound flight bags full of paper manuals and logbooks and navigational charts and checklists, making the pilot more efficient and making the plane more fuel efficient.

That quote reminded me of a fascinating New York Times article from the summer that I had clipped to Evernote, that went into much more detail about this.

The Federal Aviation Administration has authorized a handful of commercial and charter carriers to use the tablet computer as a so-called electronic flight bag. Private pilots, too, are now carrying iPads, which support hundreds of general aviation apps that simplify preflight planning and assist with in-flight operations.

“The iPad allows pilots to quickly and nimbly access information,” said Jim Freeman, a pilot and director of flight standards at Alaska Airlines, which has given iPads to all its pilots. “When you need to a make a decision in the cockpit, three to four minutes fumbling with paper is an eternity.”

Call me a clueless air traveller, but I had no idea that pilots had to haul 40 pounds of paper onto each flight. This is the sort of area where tablets can be a hugely disruptive device.

Speaking of disruption, check out these cost savings:

“I didn’t ease into using the iPad,” said Mr. Long, who has been a pilot for more than 30 years. “I jumped.”
His motivation was to save on subscriptions to paper maps and charts, which had cost him $1,414 a year. He now gets the same maps and charts digitally delivered to his two iPads for $150 a year. His iPads are also loaded with digital versions of all his aircraft, equipment and operating manuals as well as a complete copy of F.A.A. rules and regulations.

After the event, TechCrunch tried to test the fuel efficiency claim. Apparently his math was a little off, but read the comments on the post from actual pilots.

Any pilots in the crowd here? Do you use an iPad in-flight? How about my fellow passengers. Any concerns about pilots switching from paper to the iPad? I’m interested to hear your thoughts.

[…] written before about the way that tablets are changing the way that pilots access information in-flight, but […]