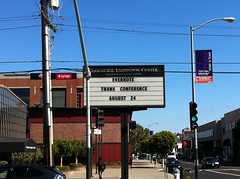 As I wrote at the time, last year’s event was nominally a developer conference that had morphed into a user conference. This year, the company embraced these two groups and had user and developer tracks. Great move.

The stated theme of the event was “Better With Evernote”, and certainly the conference was bigger and better in every way than last year. Since there were two tracks I couldn’t attend everything, but here are some of the highlights that I saw. 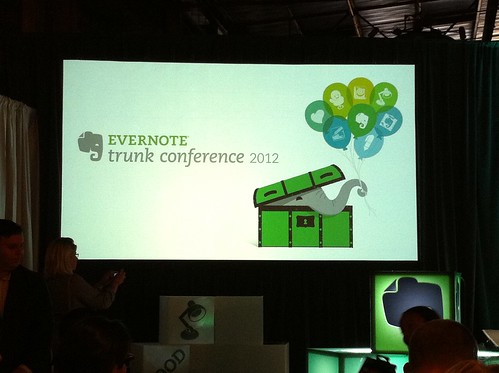 As mentioned, Evernote’s stated theme for the event was “Better With Evernote”, but what I saw is that the company is really, really focused (did I mention really?) on what they call effortless productivity.

They want you to be able to do what you need to do with the software without it getting in your way, and they want the apps to help you in unobtrusive and surprising (good surprises) ways. More on that soon.

At the start of the morning, Andrew “Marketing Guy” Sinkov came out and led the crowd in a round of… competitive rock paper scissors. There were prizes such as a ScanSnap S1100 and a ScanSnap S1500.

Try to imagine hundreds of people all standing up playing rock paper scissors, and you can possibly picture the scene. My takeaway? I am terrible at the game. I was out first round every time.

One thing I will say about Phil “CEO Guy” Libin’s ETC keynotes: they are never boring. 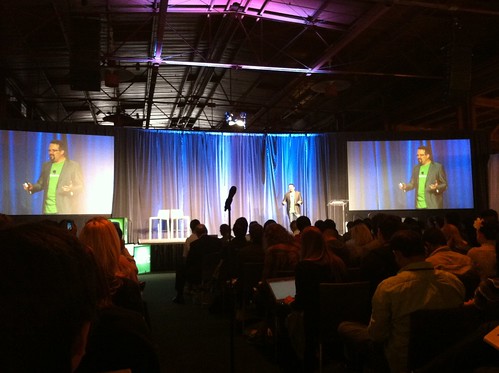 Phil’s talk covered a wide range of topics, but here are some of the highlights.

According to the CEO, there are four keys to their business offering that make it different than “regular” Evernote:

Evernote for Business users will have a 4 Gig/month quota vs. normal Premium of 1 GB/month, and it’ll be $10/month. You can sign up for a beta here.

As mentioned, a big theme at the conference is effortless productivity. It seems clear to me that while the first phase of Evernote’s existence has been getting the service growing and scaling up, this next phase is all about making the service easier to use. 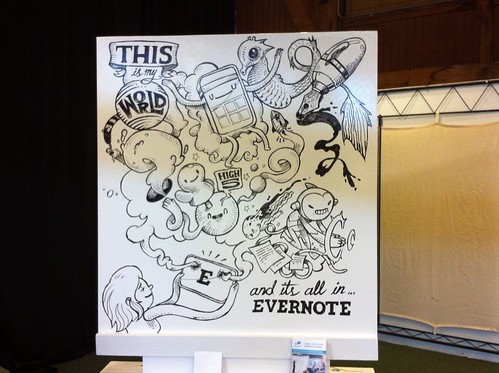 Both Phil and Mark Ayzenshtat (head of data products) talked about how they are doubling down on making it so that Evernote can “over time, complete your thoughts”.

If you’ve used Evernote, you have seen some examples of this: when you create a note on iOS, it guesses at a title based on your location and your calendar. If you clip something with the web clipper, it displays related articles.

I don’t personally use Evernote Food or Hello, but they are making it so that experiences that you have with these apps tie together with “normal” Evernote.

They’ll also be making it so that third-party apps can pull related notes, so it’ll be interesting to see what comes of that. There was a big cheer from the developer audience at that one.[3]

Coming soon is type-ahead search based on the contents of your existing notes. It’ll be coming to the desktop clients first, and then mobile apps later. I am really really looking forward to this.

Of course, you need to be careful with this stuff. The last thing they want is to have another Clippy.

Along with the augmented intelligence stuff, they are also focusing a lot on simplification of the user interface. Their lead designer, who previously worked on general branding (he came up with The Elephant), is now putting a lot of attention on UI and workflow.

Having worked in software for many years, I can tell you that their Rule #1 is absolutely true: Simple Is Hard.

An example they gave is the sharing functionality that is built in to Evernote. Currently, shared notebooks are hidden behind a Shared tab, and what they have found is that hardly anyone is using them – even within the Evernote itself.

In an upcoming redesign, personal and shared content will be shown together. As someone who has spent time trying to get my wife to use Evernote with a shared recipe notebook, I can’t wait for this change.

The Truce Of Moleskine

Last year, Evernote announced the acquisition of Skitch. This year, when the CEO started talking about how they had finally made peace with their biggest competitor, many people were curious: who would they be acquiring?

It turns out, Evernote’s biggest competitor is not another software vendor, but is paper and pen. I almost laughed when he said that, because at that moment I was writing my notes from the keynote in my Field Notes notebook[4].

The suspense increased – if their competitor was paper, how do they make a “truce” with it? It wasn’t much clearer when he brought Arrigo Berni to the stage. I think it is safe to say that most people did not know who he was (sorry Mr. Berni), but when he said he was the CEO of Moleskine, things went a little nuts. 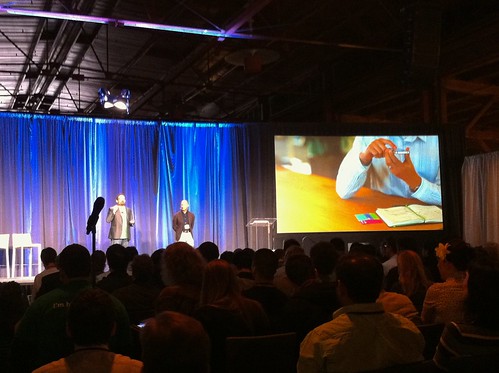 As you have probably heard, Evernote and Moleskine have teamed up to produce a notebook that, while being beautiful and Moleskine-y, has features to make digitizing it into Evernote easy.

I am not going to say too much about it now, as I will have a separate post about it soon. Suffice it to say, it was cool an unexpected when a bunch of Evernote employees streamed in to hand one out to everyone Oprah-style. 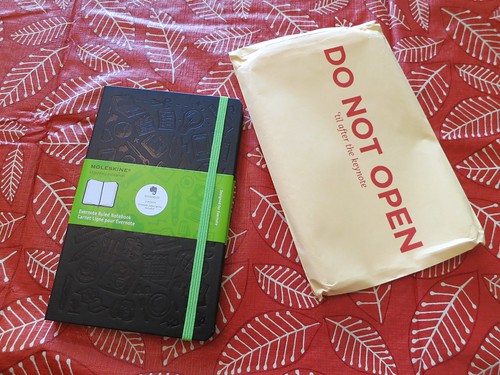 I had to miss the session by Chris Guillebeau (sorry Chris) because I really wanted to check out the developer session by Dave “Technical Guy” Engberg on data privacy and security.

From a going paperless perspective, this is huge – you want to know how your documents are being stored, and Dave was extremely candid about their setup and where they are going.

A theme that permeated Dave’s talk, as well as the Data Products talk by Mark Ayzenshtat, is that Evernote was built from the ground up with data privacy in mind. It is not like most online services (cough Facebook cough) where they build it in order to harvest your data, and then figure out “oh no, guess we should bolt some privacy on”. Because their model is making you happy enough to pay for their service instead of selling your information, they can do this.

There was some talk about their servers and data storage, but I am guessing that most DocumentSnap readers’ eyes would glaze over at that.

What Is Really Important?

This stuff is somewhat important, but let’s be honest. Most data breaches do not happen Mission: Impossible-style where someone physically breaks into a data center.

Dave made an important point: what is really important is controls around Evernote staff. Having run technical support for an online financial software vendor, I can tell you that this is absolutely true.

The presentation was very open about their staff controls. Here are some highlights:

Throughout the event, attendees were given the opportunity to submit questions, and five of them would be covered on stage. Some answers that popped out at me:

For the second year in a row, Evernote held a developer competition called DevCup. 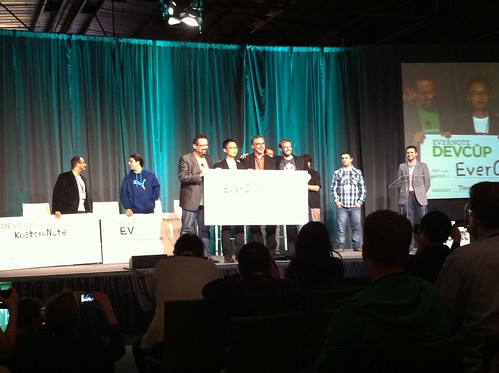 The winner was EverClip, an app that I use all the time. Congratulations to them.

Second place was Kustomnote. I personally don’t use Evernote templates, but I know a lot of people request them, so hopefully this will help.

For me, the most fascinating finalist was the Bronze winner, EV. It is a way (no joke) to use Evernote via SMS on a non-smartphone.. As crazy as that sounds, the video they showed was really compelling. If EV can pull it off, it could tremendously expand Evernote’s reach.

As an aside, it is refreshing to see a company embrace its developers instead of pulling the sort of nonsense that Twitter is doing these days.

Keeping with the “Better with Evernote” theme, there was a very busy support area and Evernote Ambassador area, where users could go and request help in person. I can only guess it was successful because there always seemed to be people there. 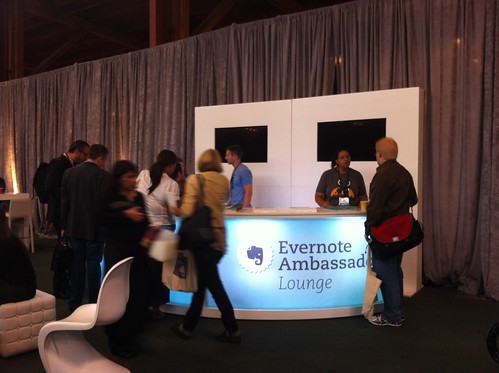 There were also a number of vendor booths around the conference area and at the afterparty. The ScanSnap booth in particular was hopping every time I walked by. 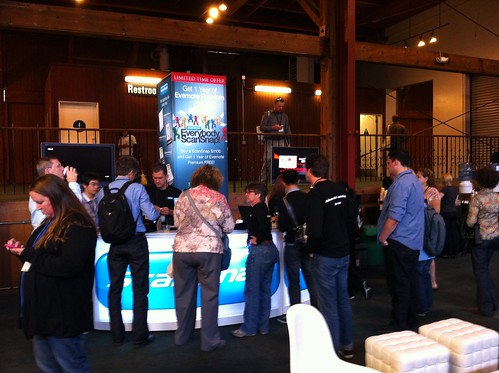 Speaking of the afterparty, there were Indian fusion burritos, free video games, and beverages. What else? Only Zoltar knows. 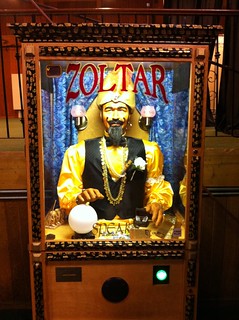 If you have the opportunity to attend the Evernote Trunk Conference next year, I highly recommend it.

[…] this changed last month when I went to the Evernote Trunk Conference and at the afterparty, I wandered upstairs to the unfortunately placed vendor area and lo and […]

Great report Brooks and good to see you there! But wait…no mention of the magician, Jamy Ian Swiss? – he gets A+ for coolly dealing with folks who'd never shuffled cards before – though his "trick" took a long time to set up! Also like your photos – posted on Evernote I"m sure.
-Brian

Video: Create A New Notebook In Evernote for iPad or iPhone | Tips To Learn How To Go Paperless | DocumentSnap Paperless Blog - September 5, 2012 Reply

[…] take any credit for this tip. I didn’t know it was possible until it came up on the Evernote Trunk Conference stage. Jamie Hull, the product manager for iOS, explained how it works to the audience during the […]