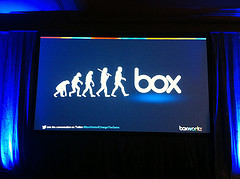 Box is a service that for some reason I have only written about once on the site, back in 2011.

Even though I haven’t been writing about it, I have noticed an interesting trend. Whenever I talk to professionals or small businesses that are extra security conscious about their use of the cloud, they have increasingly been telling me that they put stuff on Box.

A great example of this is in Kyle Durand’s great interview in the Paperless Document Organization Guide, but I have been hearing it from financial planners, bookkeepers, and other small businesses too.

So, Box has been increasingly on my radar, and when my friend Kent from Snap-File tipped me off to BoxWorks, I thought I’d better head down to San Francisco and see what is going on.

Now, there was a ridiculous lineup of speakers that you can see here including Tony Fadell (creator of the iPod and Nest), Clayton Christensen (Mr. Innovators Dilemma), Marc Andreessen (NCSA Mosaic represent!), the CEO of eBay, the inventor of JavaScript, the creator of Google Docs, and a bunch more.

Their talks were awesome, but I am not going to touch on them too much. My focus was seeing what Box was up to from a going-paperless perspective, so that is what I will focus on here too.

Things opened up with a talk by Whitney Bouck, the GM of Box Enterprise. Now, the fact that things got started with the head of their Enterprise division tells you where things are headed with the service.

Having spent many years running Support for a SaaS vendor that also catered to large businesses, it was very interesting being back in that world at this conference.

Her talk was about “Changing the Game”, which at first I was afraid was going to be filled with the standard business cliches. However, she gave some really excellent paperless examples of how technology (and Box specifically of course) are really changing things.

Some examples that she gave:

You have to respect any CEO that starts his keynote out with a Gangnam Style dance.

The map above shows Box Accelerator, their network to speed up access from throughout the world.

Some questions came up during one of the sessions about the ability to store data outside of the United States. Unfortunately, that is not (yet?) possible.

I personally know many businesses in Canada that would love to use Box, but can’t because they can’t have the data stored in the US. Other global attendees mentioned this as well. Hopefully this is something they can do at a later date.

I sat in on an interesting session on security, talking about how Box supports things like Single Sign-On, Multifactor Authentication, and how data is encrypted both in transit (like most services), and at rest on Box’s servers. That’s pretty good.

Unfortunately, they don’t yet allow you the ability to have the encryption keys yourself, something that the sneaky folks at SpiderOak were obviously trying to highlight when they were handing out “Privacy Matters” t-shirts guerilla-style.

Not surprisingly a huge amount of the discussion at the conference was about mobile.

I say not surprisingly, because apparently 50% of traffic comes from mobile devices.

There was a cool demo of their new Box OneCloud platform. According to their head of platform, there are 100 new OneCloud apps, bringing the total to 200. I see Genius Scan twice on that slide, but who’s counting?

There was a really cool demo of using PDF Expert to edit a PDF and round-trip from the iPad and save back to Box.

How could I forget the most important part of any event? Yes, I am obviously talking about the after-party. I won’t say too much about it other than it contained the holy trinity of beer, corn dogs and… Weezer!

There is much more that I could write about BoxWorks, but you get the idea. I came away extremely impressed with Box both as a platform in general, and as a way to securely store your paperless documents. Expect more coverage of Box in the next little while as I dive into its features.

Jon Jr. is also a director at Huntsman since Feb. 1