What's In The Evernote Trunk Of Funk?

What’s In The Evernote Trunk Of Funk? 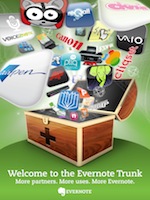 A while ago, Evernote teased that they had a big announcement coming, and today they held an event to break the news.  Their new App directory, the Evernote Trunk, is now live.

Evernote has had an API for quite a while and a number of applications have had Evernote integration for some time (many of which have been covered here), but the Trunk (get it.. trunk? elephant? <drum fill>) brings everything together.

Right now at launch there are 100 items in the directory, some of which were integrations that already existed, and some of them are brand new.  We’re told that there are a lot more coming in the future.

To get to the Evernote Trunk, click on the new + sign up at the top of the Mac or Windows client (iPhone and iPad integration is coming soon).

Like I said, right off the bat there are a ton of different items in the Trunk already, so I took a stroll through the directory to see what is there for going paperless:

I know what you’re thinking.  “Er, doesn’t Evernote already have notebooks?”.  Yes, yes it does.  But it didn’t have Notebooks (see that capital N there?).

This is something that could be pretty interesting.  Basically, the concept is that content producers like blogs and magazines can create custom branded Notebooks that Evernote users can subscribe to.

It’s a bit hard to explain without seeing it, so let’s use Make: magazine as an example.  In the Trunk, I will click on the Make:Projects Notebook. 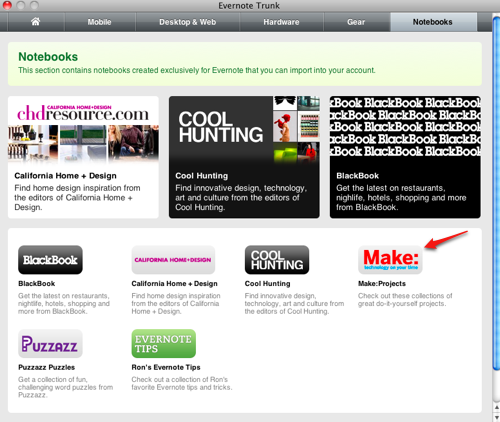 Then I’ll add the “Make:Projects Toys and Games” Notebook to my Evernote account and Sync.

Now I have a Make:Projects notebook added in my Evernote, and 4 notes with different projects I can do (or kill myself trying) 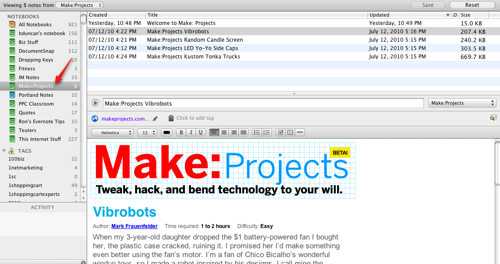 Evernote’s CEO Phil Libin has said quite a few times that his vision for Evernote is to be your “electronic brain”, and I see the Evernote Trunk as one more step in that direction.  By bringing these apps together with Evernote as the glue between them, it becomes even more integrated into our workflows.  It will be interesting to see how this all plays out, and if publishers embrace the Notebook concept.