See The Dead Sea Scrolls From Your Computer

See The Dead Sea Scrolls From Your Computer

From time to time, I like to feature interesting scanning projects here on DocumentSnap, and it is pretty difficult to find one more interesting than this.

I’m going to guess that you have heard of the Dead Sea Scrolls, but if not, here is what Wikipedia has to say:

The Dead Sea Scrolls are a collection of 972 texts from the Hebrew Bible and extra-biblical documents found between 1947 and 1956 on the northwest shore of the Dead Sea, from which they derive their name. They were specifically located at Khirbet Qumran in the British Mandate for Palestine, in what is now named the West Bank.

In most cases, the only way to see the Scrolls has been to go to the Israel Museum, Jerusalem. However, now the museum, in conjunction with Google, has unveiled the Digital Dead Sea Scrolls Project. 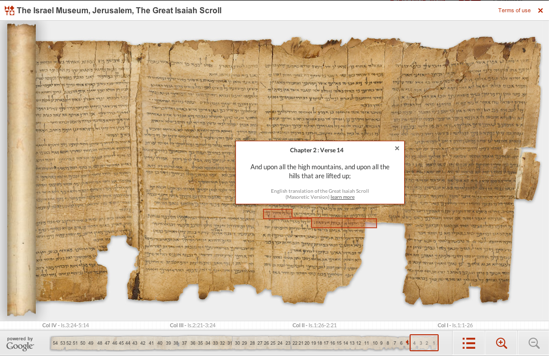 Here is what Google has to say about it in their blog post:

Now, anyone around the world can view, read and interact with five digitized Dead Sea Scrolls. The high resolution photographs, taken by Ardon Bar-Hama, are up to 1,200 megapixels, almost 200 times more than the average consumer camera, so viewers can see even the most minute details in the parchment. For example, zoom in on the Temple Scroll to get a feel for the animal skin it’s written on—only one-tenth of a millimeter thick.

You can browse the Great Isaiah Scroll, the most well known scroll and the one that can be found in most home bibles, by chapter and verse. You can also click directly on the Hebrew text and get an English translation. While you’re there, leave a comment for others to see.

This is a really cool project with a cool video. Check it out:

I’d still love to go see the real thing someday, but for now, this will have to do.

"Israel museum, Palestine"? Get it right. Where on earth would Israel museum most likely be if not in ISRAEL.

Wow, that was the worst typo ever. Too much Palestine in the news lately. Thanks for letting me know.