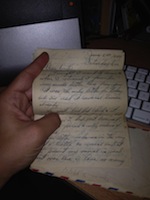 When you have old, important documents in your family, it can be hard to know what to do with them. You want to digitize them, you want to preserve them, but you don’t want to mess them up.

He has been going through and digitizing the letters and photos from his grandfather, a WWII veteran.

People know me as someone who lives in a paperless office, and enjoys a paperless lifestyle, in fact I don’t own a printer. So you might be asking, why I have held onto this particular paper. My grandfather’s letters from the war tell a profound story. He was part of the invasion of France, liberated Paris, fought in the Battle of the Bulge, freed Belgium, and smashed the Eagle’s Nest. That would make a great movie, right? Correct, and HBO turned his division’s story into ‘Band of Brothers’. I had heard some of this growing up, but now digging into his letters; it became totally real and personal for me.

Like him, I would have been pretty nervous the first time I fed one of those letters into the document feeder of the scanner, but it looks like the Canon DR-C125 that he used was up to the job.

If you read the post, don’t miss the comments on the bottom, where they go into an interesting discussion of preserving documents vs. just making them accessible. Just because you digitize something doesn’t mean you don’t need to take steps to preserve the paper, too.

Have you done any projects preserving your family history? I’d love to hear about them in the comments.

i would like to preserve my paper clippings collection, ie: clippings pasted to normal school paper;
some on both sides. with using some gluestick frm 3M – some research i did in the old days. would that be feasible.

do you know of any scanning solution less pricey than your fujis.

great work of yours – btw