In the summer of 2013, I attended the World Domination Summit in Portland, and as part of the event, there was a tremendous performance by Steve Shalchlin with the Portland Gay Men’s Chorus.

The music was moving and the audience was enraptured, but being who I am, I couldn’t help noticing something: at least a third of the chorus members were using a tablet to hold paperless sheet music. 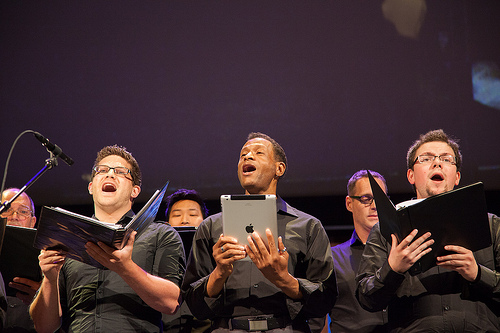 I was curious about this, so I asked someone a bit more qualified than I am if paperless sheet music is becoming “a thing”: my brother Tyler Duncan. Besides his most important quality (being my brother), Tyler is a baritone based in New York. To make our parents happy, here is a snippet of his bio: 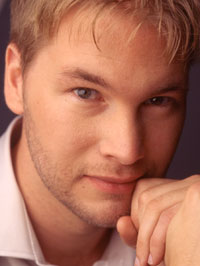 Canadian baritone Tyler Duncan made his debut at the Spoleto Festival as Mr. Friendly in the 18th-century ballad opera Flora in the spring of 2010, returning in 2011 as the Speaker in Mozart’s The Magic Flute. Other appearances have included the role of Raymondo in Handel’s Almira with the Boston Early Music Festival, Dandini in Rossini’s La cenerentola with Pacific Opera Victoria; and Demetrius in Britten’s A Midsummer Night’s Dream at the Princeton Festival. Issued on the CPO label is his Boston Early Music Festival recording of the title role in John Blow’s Venus and Adonis.

I decided to ask him what the deal with tablets and music is:

Is electronic sheet music something that you are seeing more of?

Yes, there is a great website imslp.org that has a wealth of classical music that is no longer under copyright. There are a few other places that I go to for sheet music online and if that doesn’t work then I can order it online.

In terms of things that are newer, a lot of times the composers will email PDF’s of their music directly, circumventing a publisher.

When the music is being specifically written with me in mind, I can suggest slight changes that make it easier or more natural to sing, the composer will then make corrections and send them back to me. Or go tell me to stuff it.

Have you tried to go paperless with your sheet music?

I have. It is not something I do often, but music scores such as operas are very heavy. You can fit a lot of music on an iPad and it doesn’t take up as much space. A laptop is not as handy, I’ve seen someone who forgot their music in rehearsal try to hold one sideways like a book. It was hilarious.

I have performed with and have shared the stage with people who have used tablets instead of scores. The first time is a bit nerve-wracking but so far nothing has gone wrong… I am knocking on wood.

You always get a reaction from the audience because it is something you don’t see often. I saw a double piano concerto (two grand pianos onstage playing with a full orchestra) where one pianist was 93 and played from a paper score, his 18 year old counterpart played from a tablet. Fascinating.

I like it but there are a few downsides.

What are some of the pros and cons of paperless sheet music?

What hardware and software do you use?

I’ve heard of apps like forScore and hardware devices like the AirTurn pedal.[1] Anything else you’ve heard of people using successfully?

One thing that is really handy is email and Facebook. Not hardware but I know…. people… who forget their music some times and can quickly reach out to colleagues and get a digital copy sent.

Have you ever had a sense of anyone pushing back against electronic sheet music? Have you ever run into any situations where it isn’t allowed?

A lot of musicians don’t trust the tech yet, but it is being talked about more and more often. In the realm of classical music it is still in beta testing.

Thanks so much Ty! Do you have any performances coming up that people should check out?

Yes. Schubert’s Winterreise in Vancouver for Music on Main with the talented Erika Switzer on piano. It will be from memory, so no iPad.

There is definitely a positive movement within publishing that has been working for band music. Check out http://www.bandworkspublications.com/.

Thought provoking and good to know – especially as I will be converting soon to the "i" world and trying to take greater advantage of all this technology. Thanks for the reminder of the "must see" presentation of Winterreise!