Yesterday Evernote announced big changes to the way their pricing plans work, including some things that might impact you if you use Evernote to go paperless.

If you’re a current Premium customer, you’re grandfathered at the old rate for a year.

You can see a comparison chart of the Evernote plans here.

How You May Be Impacted

For those who go paperless with Evernote, the biggest change is to the free plan. I noticed two changes: 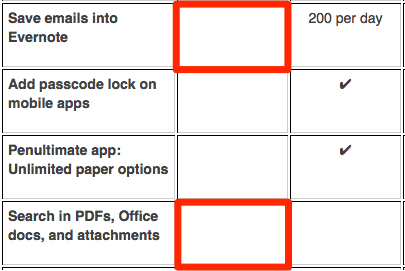 Many people, myself included, forward emails in to their private Evernote email address. The notes are then created and searchable in Evernote.

If you upload a PDF to Evernote that is not searchable, making it searchable has always been a Premium feature.

Traditionally, if you uploaded a PDF that is already searchable, Evernote would index the contents and allow you to search. Here’s where things get confusing.

In the FAQ about the new plans, here’s what Evernote has to say about PDFs:

Any PDF you added before April 29, 2015 will still be searchable. You’ll need to upgrade to Premium in order to search new PDFs or documents.

The comparison chart bit I show above also says “Search in PDFs, Office docs, and attachments” is a Premium feature.

However, I just did a test where I uploaded a searchable PDF to an Evernote Basic account via Evernote Web, and I could instantly search the contents.

So, who knows what is supposed to happen. It could be just poor wording on Evernote’s part and when they say “Search in PDFs” what they really mean is “make non-searchable PDFs searchable”, in which case there are no changes.

Or it could be a bug and indexing PDFs on the free plan is on borrowed time.

Which Plan Is Right For You?

I’ve long said that if you are planning to use Evernote for going paperless, you’ll want to subscribe to the Premium plan. My reasoning for this was purely based on upload limits – if you’re uploading a lot of documents, you’ll hit 60MB quickly.

Depending on what happens with PDF searching, you may have a new option – the Plus plan. It just depends how you’ll use the service.

Do any of these plans impact you? Will you be changing your Evernote tier? I’d love to hear your thoughts in the comments.

OMG. I thought I was the only one with this search problem. I have desktop pc… Please advise how to back up everything. And what are you migrating to?
Many, many thanks!
Jude

I’d say look for an alternative to Evernote. I’ve been with Evernote since 2009 and I’m migrating out now. I’ve been premium as long as it has been an option. I can’t get search results for any of the thousands of notes I have except those made in the past few months. Evernote Premium support is a lie. I’ve had 3 tickets open for more than a week and get no response.
After researching my issue I see I’m not the only one with the same problem or helpdesk tickets that go unanswered for weeks. Money spent on Evernote is money thrown out the window. When it goes wrong, and it will, you’ll have nobody to complain to or get help from. The forums on Evernote’s site are full of powerusers migrating to other services. My problem has been an issue for others for years and Evernote is adding features like Chat. lol

I’ve had a similar experience recently except my search is not showing recently created notes. In fact, when I enter into the search box the exact text from the title of one of my notes, it shows zero results. The same search on the web interface, though, produces the note I was searching for.

I submitted a ticket and finally got a response…nine days later. I’ve been instructed to blow away my database and reinstall – still no joy. I’ve just emailed the note to the support team at their request (exported and sent to them).

I’ve been Premium since it’s been available…not sure I want to think about migrating. What are you going switch to?