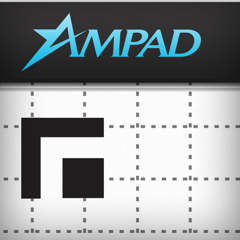 I have attended the annual conference for the National Association of Professional Organizers for the past two years, and both times I eyed the booth for a product called the Ampad Shot Note.

The Shot Note pads are billed as an easy way to digitize handwriting and sketches, and this year they were handing out some samples.

I picked up two 5×8 Writing pads in ruled and dot graph format to try out. As usual for these sorts of tests, I am trying it out at my local Starbucks to simulate “real world” use.

I can’t tell if people are staring at me because I am taking pictures of notebooks like a crazy person, or if it is because I have a World Cup match playing on the iPad beside me.

It’s All About The Corners

These writing pads come with 40 sheets of lined or graph paper. Unfortunately, they are single-sided.

The first thing you will notice is that the pages have strange-looking squares on each corner. The Shot Note app (more on that in a moment) uses these markings to easily determine the page capture area.

Speaking of the pages, I have seem some complaints online that the paper is a bit thin and that there can be some bleedthrough. Unless you’re Daniel Gold and use a fountain pen, you probably won’t have an issue, but it is something to be aware of. I personally have not experienced any bleedthrough problems with my trusty Pilot G2 .38 pen.

Capture With The Shot Note App

Of course you can take a picture of the paper with any camera-enabled app, but the point of using these special notebooks is to use the free Shot Note app which is available for iOS and Android.

When you use the app, you position the camera so that the corners are inside the blue boxes and hit the button to take the picture (it’d be nice if it automatically detects that and does it for you).

Once you take the picture, it automatically crops out everything outside of the corners.

One thing I don’t understand: if it is able to crop out everything outside of the corners, why don’t they crop out the corners themselves? It is weird that the resulting image still has the corner squares and the Ampad branding. Who would want that?

Here is an image captured with the grid paper. Once you capture the image, you can perform basic cleanup such as making it black & white, adjusting the brightness, and adjusting the contrast.

The Shot Note app wouldn’t be very useful if the images stayed in the app. Fortunately you can email the image, and one handy feature is the ability to set up a default email address.

You can also link the app to your Evernote or Dropbox account.

For Evernote, you can set a default notebook and default tags for your exported images.

Here are two notes that were exported to Evernote: ruled and grid.

The Ampad Shot Note pads are an interesting idea and the app seems to work well. The 5×8" Writing Pad, which I used, is available on Amazon. There are also 8.5×11.75" pads, 9×12" spiral bound notebooks, and even easel pads.

While everything works well, I am not a huge fan of systems like this that rely on proprietary paper that you have to keep buying. At $6 for 40 single-sided sheets, it will get pretty expensive if you use it a lot (maybe I am just cheap though).

There are also so many great document scanning apps like Genius Scan, Scanner Pro, and Scanbot that this sort of solution perhaps isn’t quite as useful as it once was.

Maybe that’s my bias though – do you see any great uses for a system like this? Let me know why I am wrong in the comments.

I have a question about the squared paper notes. Can you draw diagrams that are interpreted by the app? I’m a math teacher and this would be an incredible feature for students to use.

Regarding the cost, is there anything to stop me from just photocopying the sheets instead of buying new pads? You could copy onto scrap paper (one side already used).

I see, in answer to my first question, that the app doesn’t interpret at all. Sorry, I realized my misunderstanding when I clicked to see the note in Evernote.

Yeah, that would be cool if it did some interpretation, but no. As for photocopiers, that’s a great question. I would suspect that it would work, but I don’t have one to test it with.